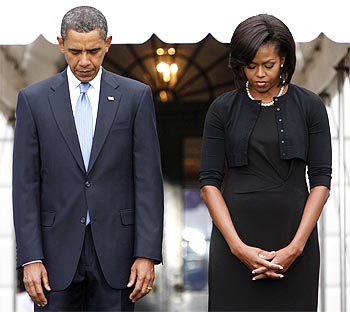 President Barack Obama on Friday led Americans in remembering the 2,752 people, who perished in the world's deadliest terror strike by Al Qaeda eight years ago, saying the United States will 'never falter' in its struggle against the terrorist organisation.

At exactly 8:46 am, when the first plane hijacked by the terrorists hit the first twin tower of the World Trade Centre in downtown Manhattan, Obama and First Lady Michelle Obama gathered with the White House staff on the South Lawn and observed a minute of silence to commemorate the eighth anniversary of the September 11 attacks.

'US will never falter' 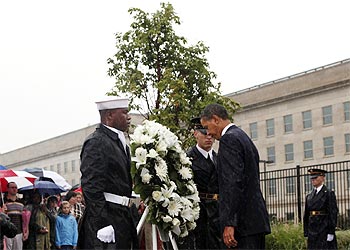 On a rain-swept day, ceremonies were also held in New York, at the Pentagon and in a Pennsylvania field where a fourth plane crashed short of its target.

Later, speaking at the Pentagon, one of the sites of the attacks, Obama said the US 'will never falter' in its pursuit of Al Qaeda and its allies. 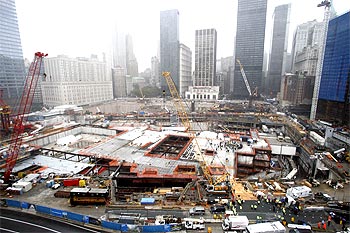 Obama said his administration would do everything in its power to keep America safe.

As many as 2,752 people, including foreign nationals, were killed in the attacks. 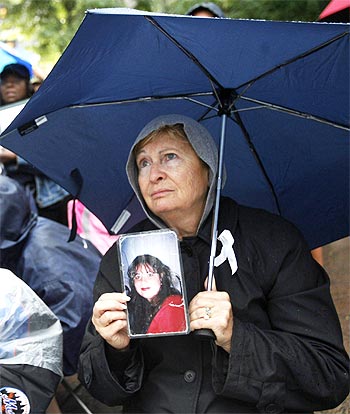 "Let us renew our resolve against those who perpetrated this barbaric act and who plot against us still. In the defence of our nation, we will never waver," he said.

"Let us renew our commitment to all those who serve in our defence, our courageous men and women in uniform and their families and all those who protect us here at home," Obama said. 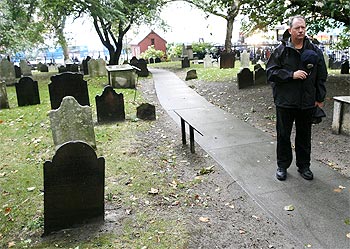 "No turning of the season can diminish the pain and the loss of that day. No passage of time and no dark skies can ever dull the meaning of this moment. So on this solemn day, at this sacred hour, once more we pause, once more we pray, as a nation and as a people".

"In city streets, where our two towers were turned to ashes and dust, in a quiet field where a plane fell from the sky, and here, where a single stone of this building is still blackened by the fires," Obama said.

'We will guard the memories' 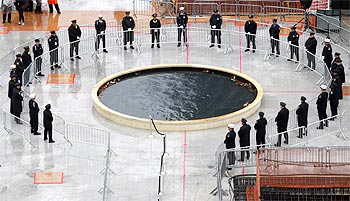 Joe Daniels, President and CEO of the National September 11 Memorial and Museum at the World Trade Centre, said, "We join the victims' families, survivors, first responders, fellow Americans, and people all over the world."

"Appropriately, the city of New York has taken up that call. From this day forward, we will guard the memories of those who died by rekindling the spirit of service and help keep us strong," Bloomberg said in a statement.

'We are all New Yorkers' 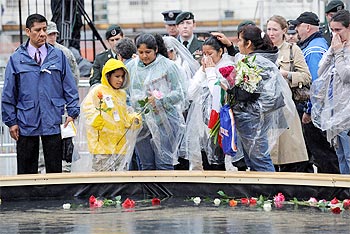 A ceremony was also held in Shanksville just before 10 am, to remember the 40 passengers and crew of United Airlines Flight 93, who died when the hijacked plane crashed in a field.

Obama wrote in a letter published on the front page of the New York Daily News that 'we are all New Yorkers'.

'Forever seared in the consciousness of our nation' 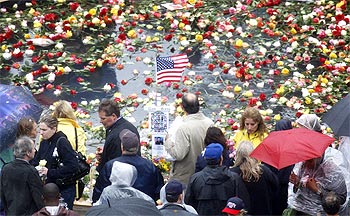 The attacks "will be forever seared in the consciousness of our nation," he wrote.

"We will never forget the images of planes vanishing into buildings; of billowing smoke rolling down the streets of Manhattan; of photos hung by the families of the missing," Obama wrote.

'The rage and aching sadness' 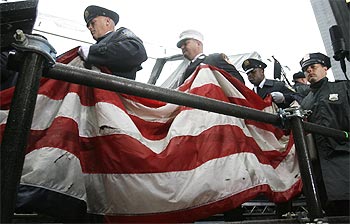