9/11: 'Shailaja wonders why people do such things' 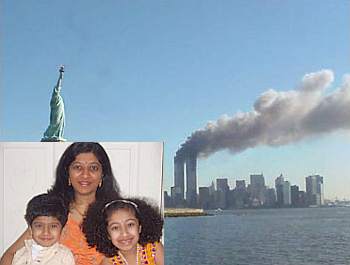 Eight years since the twin towers came crashing down, survivors of the ghastly terrorist attack are still picking up pieces of their lives from among the debris of terrible memories.

Jyoti Dave Vyas was among those who were inside the majestic World Trade Centre towers on September 11, 2001, when terror struck and were lucky enough to survive the tragedy.

Jyoti was seven months pregnant then. She remembers running down the stairs to safety when United Airlines Flight 175 hit the 78th floor of the South Tower at 9.03 am, and calls it the most tedious and longest journey of her life. It saved her and Shailaja, her yet-to-be born daughter.

When American Airlines Flight 11 crashed into the North Tower, she was at the 78th floor of the South Tower. She was working at Baseline Financial Services.

She recollects that when the aircraft hit Tower-1, the atmosphere in her office changed. They saw debris falling on their building and the people rushing outside.

Jyoti wanted to call her husband Jaldhar, but did not know how to make a call from the receptionist's phone there. She did make contact with him from the 77th floor, which was also part of her office.

"It saved her. The second plane hit the 78th floor and four of her colleagues perished on the spot," Jaldhar says.

Then, there was no message or information for almost four hours.

"I went through hell those four hours. There was nobody to call, nobody to help. People kept on calling to know about Jyoti and I had no word of her," Jaldhar, an IT consultant, remembers.

When the second aircraft hit, people in her office ducked under the tables. But she was unable to do so and debris began falling from the upper floor. At that moment, somebody grabbed her hand and ran towards the stairs.

Her attempts to go down the tower using the elevator went in vain. A pregnant Jyoti could not take the risk of squeezing into the elevator with the heavy rush of people trying to escape.

There was smoke and smell, and the stairs were slippery. Till date, she is thankful to the colleagues who stood with her when it mattered. It was a flight of 77 stairs non-stop. It seemed to be ages before the team arrived at the lobby. She was breathless. She could not feel the movement of her baby.

She told a rescue worker that she was pregnant and that she could not feel her baby. Soon they took her to the hospital in an ambulance. An ultrasound scan showed the baby was fine.

From the hospital she called the panic-stricken Jaldhar. But due to the virtual shutdown of the city, the family could not make it to the hospital. Next day, a police van brought her back home in New Jersey.

When the child was born two months later in November, Jyoti and Jaldhar, who got married in 1997, named her Shailaja -- an alias of Parvati, daughter of Himavan (King of Mountains). Our Shailaja too survived the heights of tragedy, Jaldhar said.

Eight years have passed and Shailaja will start her second grade on September 10. She has a four-year-old younger brother.

"Shailaja knows much about the attack, as she too is a survivor. She wonders why people do such things," Jyoti says.

Jyoti's company later merged as Thomson Reuters and she now works close to the WTC site.

"Everyday, when I get down from the Port Authority Trans-Hudson train, I see Ground Zero and am reminded of that day. But we have to move on," she says.

"Shailaja is the perfect kid. Initially, we thought the incidents might have affected her psychologically. But there is no sign of it. She is a darling who is calm and smiles at everybody," Jaldhar says.

Though Jyoti has gotten over the trauma of that day, it was not so in the earlier days.

Less than a year after the incident, she went for a film and felt sudden fear after the lights were dimmed and left without watching the movie, he adds.

Image: Smoke billows from the WTC towers on September 11, 2001. (Inset): Jyoti with her children