'It's important to defy terrorism' Image: Ravi Verma
Photographs: Prasanna Zore and Abhishek Mande
A Chuck Norris-look-alike, an immigrant labourer and a Man-U fan have just this one thing to say on the first anniversary of 26/11: It's important to defy terrorism.

Ravi Verma is 35 years old. He shines shoes for a living. Walking up and down the Colaba Causeway he wonders why there's so much activity outside Leopold Cafe today. You don't believe him at first but he tells you that he's been in Mumbai for just over two weeks. He stays on one of the footpaths in Masjid Bunder and his biggest concern is that one day he may be evicted from the pavement, his home.

"I heard about the blasts when I was in my village in Madhya Pradesh. It really didn't make much of a difference to me then. But if something were to happen in Mumbai today, I don't know what I will do. This is the only city where I can make some money and send it back to my wife and three kids," Verma says.

Verma who claims to be trained in cattle immunisation says that Mumbai was the only city he knew which would give him the opportunity to survive and earn a decent living.

"We cannot let these people (terrorists) take advantage of this city. Everyone should live in harmony. I have been here for about 20 days now and I am surprised with how the city has accepted me. I have already made friends and feel at home. I really hope people who did this get the punishment they deserve."

'The world cannot be changed by violence' Image: Duke Okes with his wife
Photographs: Prasanna Zore and Abhishek Mande
Dukes Okes is a knowledge architect from Tennessee. He was in India to address a training session in Mumbai. When we tell him he reminds us of Chuck Norris, he laughs loud and says we are not the first ones to mistake him for the star.

Okes has not been to India before and confesses that he was somewhat apprehensive to visit the city after 26/11. "Last year when I read about the attacks in the papers, I was filled with anger and frustration. Little did I know that I would be on the site of the attack a year later!" he says.

Okes continues: "I am amazed by the way different communities co-exist in this city. It is just a reminder of how the world cannot be changed by violence and disruption of normal life. Initially I was a little scared of travelling to India. But I got over it. You cannot allow things like these to keep you going to a place that is so beautiful. It is important to show defiance."

'You cannot respond to violence with violence' 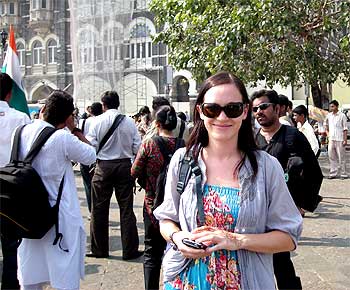 Image: Julie Moorhause outside the Taj
Photographs: Prasanna Zore and Abhishek Mande
Julie Moorhause is a British expat who works in the United Arab Emirates. Moorhause who is scheduled to fly to Bengaluru later on Thursday night, says she chose to make a stopover in Mumbai for a day. "I chose to visit the Taj today as a show of solidarity and had got myself booked in a hotel near the venue so I could come by this morning," she says.

Moorhause also confesses that after the terror attack last year her biggest fear was that India would go to war with Pakistan. "Thankfully that didn't happen. 26/11 was awful and terrible. But you cannot respond to violence with violence," she says.

Moorhause says that you cannot get scared by the attacks and stop visiting the places that have been attacked. "Mumbai is a fantastic, busy and a vibrant city. By standing back on its feet, Mumbai has shown that it can defy terror come what may. And I think that is a lesson for all of us to learn."
More