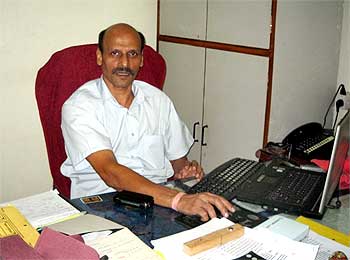 "Wait, wait! What are you talking? Headley-Rana don't make a bit of difference to my case. Main ekdum confident hai. (I am supremely confident)," says Mumbai Senior Inspector Ramesh Mahale, the investigation officer in the 26/11 Mumbai terror attacks case, when asked about terror suspects David Coleman Headley and Tahawwur Hussain Rana, detained in the United States by the Federal Bureau of Investigation on charges of plotting attacks against India and Denmark.

Some reports suggest that Headley and Rana are linked to the 26/11 case, but the Mumbai police are sticking to their version of events.

Mahale's confidence in getting justice in the 26/11 case is absolute. In spite of apprehensions that Headley and Rana could be associated with 26/11, he is sitting cool and only worried about the next day's proceedings in the trial currently beeing conducted at the city's Arthur Road Jail. "So far no evidence has emerged linking Headley and Rana to my case."

The 26/11 case being tried in the special court is 'my case' for Mahale.

"I am 99 percent sure there was no local involvement in the 26/11 case. But in case -- I am saying in case -- if anything is found then it will not affect my case against (the lone surviving terrorist) Ajamal Kasab and the two other Indian accused (Fahim Ansari and Sabahuddin Ahmed) at all. Even if a Headley-Rana connection emerges it doesn't affect my findings and charges. Kasab did not know them, at the most his mentors in Pakistan may be knowing them. It is the question of the quality of evidence. We have worked hard to prepare the charge-sheet. We have weighed our evidence from all angles." 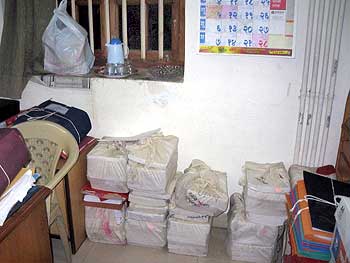 Image: The 13,000-page charge-sheet that was filed in the case.
Photographs: Sheela Bhatt
"We had Kasab to know what went on behind this attack," says Senior Police Inspector Ramesh Mahale. "He told us about his handlers. But he did not know anything about the people who may have provided information to his handlers. These guys were not in front. Why should I feel embarrassed about not knowing about people who were behind Kasab's handlers?"

He then adds with confidence, "If Pakistan would have allowed us to interview (Lashkar-e-Tayiba terrorists) Zarar Shah and Zaki-ur Rehman Lakhwi, we would have got to know much more about the case. I don't see FBI revelations affecting my case nor do I see any contradiction."

Then Mahale asks, "Tell me, exactly how will it make difference to my case? My evidence against Fahim Ansari and Sabahuddin Ahmed stands its ground even if Headley or Rana are introduced in the case. They were hiding behind Kasab's handlers."

"Those claiming that Headley and Rana are linked to my case don't know the facts of my case. I have witnesses from Badhwar Park (the area in south Mumbai where the terrorists landed) who have told us that Fahim came to them looking for a place to stay. I have another witness, who was an instructor at the computer class that Fahim went to. We have enough evidence from Grant Road (in south-central Mumbai) where he lived paying more than the market price. When he was living in a rented place giving fake name to do a reccee (reconnissance) of places in Mumbai on behalf of the Lashkar, he didn't meet his wife living in Goregaon (north-west Mumbai). Why would he keep his presence in Mumbai secret from his wife?"

'We can't just hang Kasab, the rule of law must prevail' 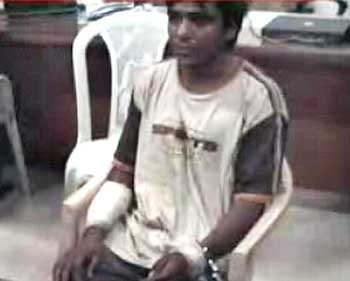 The photograph of terrorist Ajmal Kasab sitting on a chair was taken at Senior Police Inspector Ramesh Mahale's office.

Mahale has been in the police force for almost 25 years, but nothing in his career matches his current assignment. No one in Mumbai is better informed about the micro and macro details of the 26/11 case than Mahale and his core team.

On November 28 last year, Rakesh Maria, Mumbai's joint commissioner of police (crime), made him the investigating officer of the historic case.

Mahale is well aware that the country, and indeed many agencies elsewhere, are watching the proceedings and waiting for the Indian justice system to deliver.

He has to make sure that enough evidence is presented against the accused and that all the relevant papers remain in the files.

He also has to ensure that 1,000-plus witnesses's statements are duly recorded keeping in mind the demands of the various laws of the Indian Penal Code and Criminal Procedure Code.

In the 26/11 case he has more than 1,000 elements of physical evidence which includes the bodies of the nine slain terrorists, the dinghy in which they arrived on the shores of Mumbai, the weapons that terrorists used and the material found on Kasab's presence when he was captured early on the morning of November 27.

Two hundred and sixty-six witnesses have appeared in court so far. Mahale knows what each witness told the court. He is a dedicated officer with a sharp legal mind.

A simple man with simple habits -- he is so hard-working that in the last year, he has not taken even 10 days leave from his job. His colleague jokes that he is not only obsessed, but intoxicated by the case. Mahale, who is not one to grab the headlines, says matter-of-fact, "I am taking a salary so I better work."

He was given credit when his team filed the charge-sheet within the statutory limit of 90 days. He has only one aim -- to make sure that the charges against Kasab and the other accused stand up in court.

"Most people tell me that Kasab should be hanged right away," he says. "But I don't listen to them. That is not possible under Indian law. The rule of law must prevail."

'Kasab is a chalu aadmi' 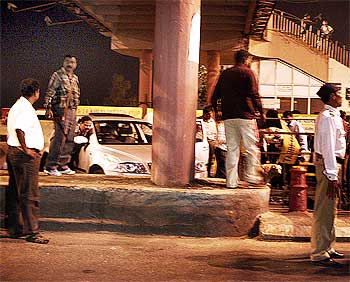 Image: The spot where Kasab was captured.
Photographs: Uttam Ghosh
Ramesh Mahale sits till late at night in his small room at the police commissioner's office complex in south Mumbai. There are no fancy gadgets around.

As soon as the attacks occurred, the city police formed 12 teams of 98 people for the 12 sites that the terrorists attacked.

All the teams collected evidence, created witness lists and reconstructed the incidents. All of them reported to Mahale, who kept the bigger picture in mind and asked his teams to get more evidence when needed.

As soon as he took up the attack at the Chhatrapati Shivaji Terminus, he says he found that the most important evidence in the case was the video footage recorded by the close circuit television cameras. Mahale says the police examined every inch of the footage minutely.

In the early hours of November 27, Mahale met Kasab for the first time when he was sent by another unit to interrogate him.

"My first impression of Kasab was that he is a chalu aadmi (smart operator)," recalls Mahale. "He is a trained mind. Don't think he is naive. He is intelligent, but trained to commit terror. He keeps changing his tune. The guy who came to die can commit any crime."

In one corner of room there are 12 boxes carrying all the files related to the 12 police cases that is clubbed under the 26/11 case.

These 12 cases refer to the incidents of terrorism that occurred at the Chhatrapati Shivaji Terminus, the Leopold Cafe, the Cama Hospital (inside), the Cama Hospital (outside), the Mazagaon and Vile Parle taxi blasts, the Taj Mahal hotel, the Trident Hotel, Chowpatty (where Kasab was captured), the Skoda hijacking case, the incidents aboard the MV Kuber and Nariman House.

Abbas Qazmi, Kasab's lawyer, has found loopholes in Mahale's preparation several times, but the senior police inspector says, "There are 11,340 pages and some 1,500 pieces of evidence. Mistakes are bound to be there. Four or five small mistakes don't alter the truth of the case."

Mahale quotes a Supreme Court judgment that says that an investigating officers's mistake should not benefit the accused.

At around 9 pm, when our interview ends, Mahale points out, "Look, how much work of the day is still pending. I must complete this before I catch a train to go home."