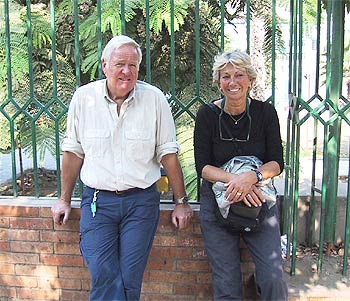 Juergen and Daphne Schmidt had planned their trip to India for over 25 years -- an exciting, hectic trip that was to end with a dinner at the Leopold cafe in Mumbai on the night of November 26, 2008... Dilip D'Souza reveals what happened thereafter.

As a girl growing up in Delhi in the 1950s, Daphne Thomas would frequent the genteel colonial-era Polo Club. She indulged in a number of unusual delights, like riding along the Yamuna River, Sunday hunts and what she called 'wonderful Tent Picking Shows'.

But what she remembered most fondly were the polo lessons from a young officer in the President's ceremonial bodyguard. In 2008, over 50 years older, she wrote a letter to him, observing that teaching her polo was 'a most courageous thing (for you) to do.'

I don't know why she thought that: Perhaps she recalled being a particularly obstreperous student?

She addressed the letter to Brigadier Sawai Bhawani Singh, now the honorary vice-president of the Indian Polo Association and, incidentally, the maharaja of Jaipur. As if in a fairy tale, the charming young officer of a little girl's memory had grown up to be a real-life maharaja.

As she explained, she wrote her letter 'in the hope of being able to bring a smile and a few memories back of what seems to me another life.' But why did she write to His Highness at all, fully half a century on?

Because she and her husband Juergen were going to travel through India in late 2008. She looked forward to speaking to her polo teacher, and to revisiting her youthful memories for the first time since that other life.

And as I absorb all this, even as I read the words I am writing, I can't help my own memories. Those from just a year ago.

Has the anger lasted a year? 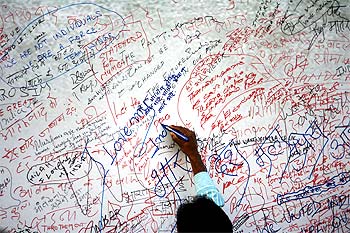 Image: A visitor writes on a message board for the victims of 26/11 terror attack near the Taj Mahal Hotel.
Photographs: Arko Datta/Reuters
For friends from out of town have asked off and on through the year, "What's changed since the terror attacks last November?"

Maybe I'm a cynic, but my most truthful answer is, "Nothing".

Yes, immediately after the assault there was plenty of anger -- I felt it myself, and in so many around me -- much of it directed at Indian politicians and government. Yes, we of the middle-class all resolved to take a greater interest in politics. And yes, the anger drove several so-called 'people's candidates' to stand for office in the general elections last May, though none came close to winning.

But has the anger lasted a year? Do we have better governance, security or justice than we did a year ago? Are we more informed and conscientious voters? Do we have less focus on the empty issues that only divide us, and more on what binds us? After all, a year ago we resolved to find just such unity and justice as the best response to terrorism. Have we found them?

Consider: Voter apathy in Mumbai actually touched record levels this year: Turnouts for the general election in May and for the October Maharashtra assembly election were approximately 43 per cent, the lowest ever. Another sign of the times came in early October.

A spokesman for one of the sullen parties that claim to stand for the 'sons of the soil' in Mumbai said this to The Hindustan Times newspaper: 'This is not a cosmopolitan city any more. People who insist on using 'Bombay' should be thrown out of this city.'

And most recently, a simple statement like 'Mumbai belongs to India' results in controversy.

In a year, some of us have slid from wanting to stop thugs who are intent on indiscriminate murder, to wanting to 'throw out' the people who call the city 'Bombay'. To finding offence in -- I can scarcely believe this -- the notion that this city that was attacked by terrorists actually belongs to India.

So much for uniting to defeat the spectre of terrorism.

'Thrilled to be touring India' 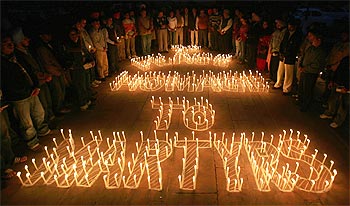 Image: People take part in a candlelight vigil held for victims of the terror attacks.

That's why I find a strange comfort instead -- even an antidote for cynicism -- in one story out of so many from those tragic few days. In the hints this story carries of an India less wracked by suspicion, division and terror. In the spirit, the enthusiasm, the old and affectionate ties to India that brought a middle-aged couple to my city. In Daphne and Juergen.

Daphne's connection to India goes back to long before the polo lessons, long before Indian Independence. Her father, Geoffrey Benion Thomas, spent years in this country as a distinguished doctor.

An ob-gyn surgeon, he was a professor of medicine in Madras as the British Raj wound down. Daphne was born there. As with many doctors of the time, Thomas had to practice more than just what he had trained in; he became a general surgeon.

The family remembers his stories of operating in a tent in the Khyber Pass in the mid-1930s, using a zinc-topped table that sometimes needed to be propped on overturned buckets.

In 1950, aged 45, Thomas became senior medical officer at the British high commission in New Delhi, a post he held until 1962. He treated Edmund Hillary and Tenzing Norgay when they returned from their historic ascent of Everest. He was Queen Elizabeth's doctor when she toured India, but he had other brushes with royalty too. Among his patients in those years were ladies of the royal family of Jaipur.

Perhaps the good doctor was attending to them even while a son from that family was teaching his daughter polo.

As for Juergen, he was looking forward to this Indian journey too, and he had his own reasons. After an illustrious career with the German air force and the North Atlantic Treaty Organisation in Brussels, Juergen had turned to photography in retirement. Some of his travel photographs are on display in a museum in Cologne. Now India promised to be a visual feast. As a relative later wrote to me, Juergen was 'thrilled to be touring India as a photographer.'

The trip to BOMBAY 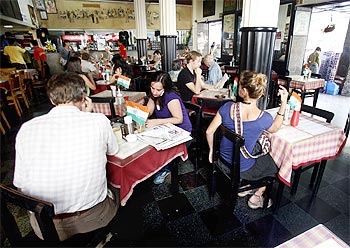 Image: The Leopold Cafe today
Photographs: Arko Datta/Reuters
Through most of 2008, Daphne and Juergen planned their trip. They found an Indian travel agent who made all the arrangements for them.

They told the agent they had been thinking about India not just for a few months, but for a quarter-century. Besides, this pilgrimage to the land of her birth, this journey here with her husband of many years, was also a celebration for Daphne, who was in remission from an attack of ovarian cancer.

Working with the agent, they lined up a tough but rewarding schedule for their three weeks in India: Delhi, Rajasthan to take in the Pushkar camel fair, Kerala, Goa and then Mumbai.

In this country finally, they had a hectic, happy time. About halfway through the trip, they sent a breathless, nearly comma-less email message to Daphne's brother Martin in Boston:

'We are having a wonderful time the hotels are fantastic, our driver is very good and we are feeling great and enjoying ourselves even though we will need a rehab when we get back. We do manage to get some swims in between morning guided tours and evening excursions and a lateish dinner. Until now we are very happy with the tour. We just wanted to say hullo and let you know that we are alive and kicking.'

As Martin's wife Myrna told me a month later, that "last line is too ironic."

In Cochin towards the end of their trip, their travel agent asked them to fill out a 'Client Tour Report'. In sure, slanting capitals, Juergen had only praise for all the arrangements 'good, very good and excellent' -- though he did mention that the 'food could be improved.'

Catching their breath in Goa a few days afterward, they wrote to Martin again: 'Recovering from our expedition through India. Will continue to BOMBAY in two days according to schedule and fly home from there.'

(Caps in the original; I can't help reading it as an unwitting and ironic comment on throwing out people who use that name.) 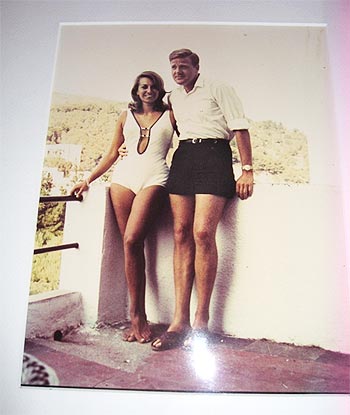 According to schedule indeed, Daphne and Juergen flew to Mumbai two days later. Their flight home to Germany was not till much later that night, so they had several hours to spend in my city.

The travel agent had arranged a car and driver for them. They took in the sights of South Mumbai: Marine Drive and its beach, Churchgate station and Victoria Terminus, Flora Fountain, the museum and the Gateway of India.

Juergen bought himself some Punjabi music CDs. At exactly 9 pm, they stopped for a final Indian dinner, thinking they would go to the airport directly after their meal.

Nearly 24 hours later, my phone rang. It was an old school buddy, calling from Boston. Some friends of his there, he told me, were trying to get news of relatives, a couple who had come to Mumbai. The driver they had hired for the evening had dropped them off for dinner, telling them to call him when they were done. But in the mayhem that had overwhelmed that part of the city, he hadn't heard from them again. Could I use my journalist contacts to find out what had happened?

Seriously mangled in the transcription, but there could be no doubt.

Juergen and Daphne Schmidt, on the last night -- the last couple of hours -- of a trip 25 years in the making. Daphne and Juergen, rounding off a memorable Indian safari with dinner at that Mumbai institution, that Lonely Planet favourite: Cafe Leopold.

Juergen and Daphne. On that cool Wednesday evening last November, they were among the first of nearly 200 people slaughtered by terrorists.