News
Business
Movies
Sports
Cricket
Get Ahead
Money Tips
Shopping
Sign in  |  Create a Rediffmail account
Rediff.com  » News » I will prove how big a liar Kasab is: Nikam

I will prove how big a liar Kasab is: Nikam 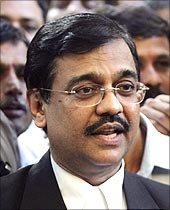 The 26/11 terror trial is not only against Pakistani gunman Ajmal Kasab, who was caught alive, but also against the terror organisation Lashkar-e-Tayiba, which masterminded the Mumbai attacks, Special Public Prosecutor Ujjwal Nikam said here on Wednesday.

"Kasab is one of the instruments of the terror outfit. He and his associates were a small part of LeT, which wanted to inflict serious damage to India by attacking its commercial capital," Nikam said in an interview on the eve of the first anniversary of the terror strikes.

The prosecution has already tabled solid evidence of Pakistan's links to the attacks in the form of telephone intercepts of talks between the 26/11 terrorists and their Pakistani handlers, Nikam said.

According to him, if Pakistan really wanted to succeed in fighting the terror nurtured on its soil, its investigating agencies could use the evidence adduced in the 26/11 trial court in Mumbai against the LeT suspects in the ongoing trial going on in Pakistan.

"Pakistan can match the voice of the handlers with the absconding accused believed to be hiding in that country and also with the LeT suspects facing trial there," he suggested.

"Kasab has revealed before a magistrate that he and his associates were trained in a LeT camp in Pakistan by a Major General," said Nikam, adding that he wanted the Major General's identity to be disclosed.

Stating that Kasab had no regrets for the ghastly crime he committed, Nikam said, "Kasab told the magistrate that he was voluntarily giving confession to motivate 'fidayeen' like him. This shameless conduct (of Kasab) has been brought on record by us."

The criminal conspiracy was hatched in Pakistan and therefore to establish this charge was a challenging task for the prosecution, he said.

"Fortunately, I am now in a position to prove on the basis of documentary evidence how the diabolic plot to shatter India was hatched and executed by the LeT," Nikam said.

"The moment I filed the chargesheet in this case, I realised the enormousness of the trial. I left many other important cases and gave top priority to this. I wake up every day at 4.30 am and prepare my notes for the prosecution's case," said Nikam, who spends two hours every day with Investigating officer Ramesh Mahale for finalising the day's strategy before appearing in the court.

Defence lawyers, no doubt, have limited scope in this case because voluminous evidence against Kasab and two other accused has been tabled in the court, he said.

"However, I fail to understand why the defence does not admit formal documents in this case. Due to this, the trial has got delayed because we have to examine more witnesses to prove the terror incidents," Nikam said.

About Kasab, he said, "He is a good actor and frequently changes his stand. He tries to create confusion by partly admitting guilt and partly denying it."

Eyewitnesses have seen Kasab gun down Constable Tukaram Omble and he even confessed to his crime before the Magistrate, but changed his stand before the court and denied having fired at the policeman, Nikam said.

Nikam said at that point his friends in legal fraternity advised him to wind up the case and seek capital punishment for Kasab.

"Had I done so, the opportunity to prove Kasab guilty of all charges would have been lost and evidence could not have been used against absconding conspirators in Pakistan," he said.

"I am going to use Kasab's confession as well as his part admission of guilt in the court and will expose him to show how big a liar he is and how he has been trained to misguide the authorities," he said.

About the absconding accused, the prosecutor said he has no hopes of their surrender or about their being caught by Pakistan and deported to India.

We have enough evidence against Kasab: Nikam

26/11 case to conclude on first anniversary