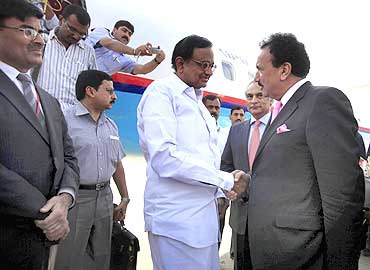 Home Minister P Chidambaram on Friday night met his Pakistani counterpart Rehman Malik and is believed to have pressed for urgent action against JuD chief Hafiz Saeed and 26/11 handlers, including those who are believed to be in the Pakistani Army.

Chidambaram, the first Indian home minister to visit Pakistan in three decades, met Malik at the Interior Ministry in Islamabad, where he was accorded a red carpet welcome and given a ceremonial Guard of Honour.

In a special gesture, Malik went to the Chaklala Air Base in Rawalpindi and personally received Chidambaram, who arrived to attend the SAARC Home Ministers' Conference tomorrow.

On their way to the VIP lounge, both Chidambaram and Malik were seen talking to each other and posed for photographs.

The meeting went on for almost two hours, well beyond the scheduled time of 45 minutes and Malik said his talks with Chidambaram were "inconclusive" and will meet again over dinner. Chidambaram and Malik held one-on-one talks for over one hour after which the delegations joined them.

"It is a very good moment and good beginning. It was a good discussion and it sends out a good message to the people of both Pakistan and India," Malik told reporters after the meeting.

During the meeting, Chidambaram, the first Indian Minister to visit Pakistan after the 26/11 strikes, is believed to have told Malik that the time has come for Pakistan to address issues concerning the deadly Mumbai attacks with seriousness that they warrant.

The Indian Home Minister is also understood to have sought action against Saeed, whom New Delhi considers as the mastermind of the 26/11 attacks, and handlers, including those who are believed to be serving in the Pakistani Army, of the deadly attack that killed 166 people.

Chidambaram is also believed to have sought voice samples of the Pakistani handlers and raised issues like infiltration on the border of Jammu and Kashmir and Pakistanis who have infiltrated and are indulging in militant activities.
Later, Chidambaram also met Foreign Minister Shah Mehmood Qureshi.

Govt may clear 5 of 7 Collegium recommendations