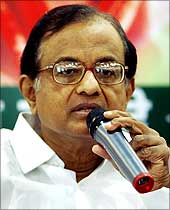 India on Friday asked Pakistan to expeditiously bring to justice all those behind the Mumbai terror attacks, including Jamaat-ud-Dawa chief Hafiz Saeed and handlers of terrorists, including some Pakistani army personnel.

Home Minister P Chidambaram said he will 'politely' tell Pakistan that the time has come to address issues concerning the deadly Mumbai terror attacks with the seriousness that they warrant.

"I will use the opportunity to bring home to Pakistan the gravity of the issues and the need for response that is appropriate to the gravity of the situation," he told reporters accompanying him to Islamabad, where he will attend the South Asian Association for Regional Cooperation Home Ministers' Conference and also hold talks with his counterpart Rehman Malik.

"It has been 18 months since I took over. The time has come to address these issues (regarding Mumbai terror attacks) with the seriousness that they warrant. That is what I am going to tell them politely," Chidambaram said.

When queried on whether he will raise the issue of Hafiz Saeed still being free with Malik, Chidambaram said, "Hafiz Saeed is one among them. There are controllers, there are handlers, so we need to know what action they (Pakistan government) will take against them. These matters cannot be ignored for ever. Somebody has to address these issues sometime or the other."

He said he will also take up other issues like infiltration along the border of Jammu and Kashmir and Pakistanis who have infiltrated to indulge in militant activities.

When asked whether India will accept Pakistan giving voice samples to any third country, he said, "I suggested one time that don't give it to us. Give it to a third country so that it is subjected to forensic analysis in a third country."

Asked whether Pakistani army personnel were among the handlers of the 26/11 attackers, he said, "If you are quoting from the dossier (that India gave to Pakistan), you are quoting correctly. But I do not know whether they are real names or assumed names."
Asked whether the handlers included two Pakistani army Majors, Chidambaram said, "That is what the dossier said."

On whether he would raise the Pakistani-American LeT operative David Headley's connection to the attacks, Chidambaram said he won't do so directly.

Chidambaram heads to Pak with terror on agenda