What is on the Hillary Platter, Obama asks Clinton 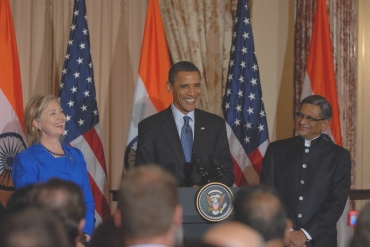 United States President Barack Obama was curious to know what was served on the 'Hillary platter', which the popular Bukhara restaurant at ITC's Maurya hotel in New Delhi created for the Secretary of State, when she visited her favourite Indian restaurant during her India visit last year.

As Obama greeted the gathered guests with Namaste, he wondered if the Hillary platter had chapati, amidst laughter at a reception hosted by Clinton in honour of External Affairs Minister S M Krishna.

"Secretary Clinton, I think, as you may be aware, is a great admirer of India. And I know the sentiment is shared in return," Obama said in his opening remarks at the reception with both Clinton and Krishna standing by his side.

"In fact, I'm told that one of the Secretary's favourite restaurants in Delhi added a new item to the menu -- the Hillary Platter," Obama said as the audience burst into laughter.

"This is true," he quipped and quickly turned towards Clinton and asked, "Now, what does it have? Chapati?"

"Oh, it's got all kinds of things," Clinton responded, as the audience burst into laughter once again.

Someone from the audience suggested that Obama must try the Hillary platter when he visits India. "I will try that plate," Obama responded.

Earlier, welcoming the US President at the State Department, Clinton said Obama has a strong personal commitment to the India-US relationship. "Mr President, we have worked hard today, and we've actually been working hard ever since the strategic dialogue was agreed to between you and Prime Minister (Manmohan) Singh. Many of the people you see before you are the people who are actually doing the work that make minister Krishna and I look like we're fulfilling our responsibilities," she said.

"But we so value this relationship," she added.

"I came across a quote which I think summarises what we feel. Mark Twain once wrote, "India is the cradle of the human race, the birthplace of human speech, the mother of history, the grandmother of legend, and the great-grandmother of tradition. And I love the fact that it's mothers," Clinton said amidst applause.

"Well, given the talent, the expertise and the enthusiasm in this room, not only from our distinguished delegation from India and all of the people here in our government who have worked so hard, but Indian Americans, who themselves embody the importance of this relationship, we are so excited as we broaden and deepen this extraordinary partnership," she said.

"And now the real work begins. We're turning our ideas and our aspirations into actions and results, and working to unleash the tremendous potential that exists for even greater opportunity, prosperity and peace for the people of India and of the US and of the world," Clinton said.

Krishna on the 'trust deficit' between India, Pak