Pak will have to fight war if India doesn't talk, says Hafiz Saeed 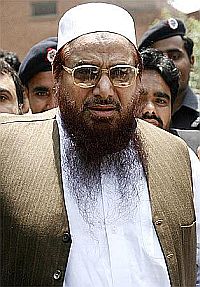 Notwithstanding the recent Indo-Pak foreign secretary-level meeting for which India took initiative, Jamaat-ud-Dawah chief Hafiz Mohd Saeed has said Pakistan will have to 'fight a war at all costs' if New Delhi is not prepared to hold talks.

"India wants war... If India is not prepared to hold talks, Pakistan will have to fight a war at all costs," Saeed said in an interview to a news channel.

Asked about India's accusations about his involvement in planning and carrying out the 26/11 Mumbai attacks, Saeed replied, "Let India prove it in any court, I will be ready to accept everything."

To another question on whether people should go to Kashmir for 'jihad' against India, he said there was 'no doubt' in his mind that this should be done.

He also said he had no doubt that the Pakistan government is 'cowardly.'

Saeed's comments came days after the foreign secretaries of India and Pakistan held talks in New Delhi on February 25, the first official parleys between the two sides since the Mumbai attacks.

Though there was no breakthrough in the talks, the world community welcomed the development in the hope that it would lead to normalisation of ties between the two countries.

The JuD chief's face was not shown during the interview and he was filmed over his shoulder from the back. He said he did not wish to be filmed as it was not allowed by 'Shariah' or Islamic law.

Saeed, also the founder of the banned Lashker-e-Tayiba, was placed under house arrest in Lahore in December 2008 after the JuD was declared a terrorist group by the United Nations Security Council in the wake of the Mumbai terror attacks.

He was freed after about six months on the orders of the Lahore high court.

The Pakistan government challenged his release in the Supreme Court, but no hearing has been held in the matter for several months after the case was adjourned for various reasons.

Several members of the LeT -- including its operations commander Zakiur Rehman Lakhvi, a former aide of Saeed -- are currently being tried by an anti-terrorism court in Rawalpindi for their alleged role in planning and facilitating the Mumbai attacks.

This case too has been affected by controversy and delays.