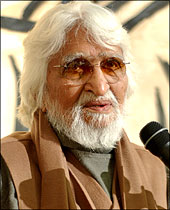 Legendary artist M F Husain, who has been living in self-imposed exile for nearly four years following a spate of cases in India over his controversial paintings of Hindu goddesses, has accepted Qatar's offer to confer nationality on him.

The 95-year-old painter has accepted the offer and it is under process, Husain's son Owais Husain told PTI in Dubai on Friday.

He said the Qatari nationality was not something he asked for, but it is the truth now.

"I respect his individual decision because somewhere as a son you have witnessed a range of emotions he is going through," Owais said.

He also said that his father was in Doha currently and would return to Dubai next month.

"He (Husain) got a lot of calls, some provocative ones at that, but he didn't succumb to it and that goes to show his resilience at the age of 95. After all he is older than independent India," Owais said, noting that Husain was born in 'one of the most holy places (Pandharpur -- a pilgrimage site) of Maharashtra.'

Owais, who is also working on a documentary on the life of Husain, said his father has been extremely prolific as a painter in the past few years.

"Since he (Husain) is not a man of words but a man of images, he has poured it all out on the canvas. He has painted the Ramayana, he has painted on India and a whole lot of series in the past few years he has been away from India," he said.

"He has travelled to a lot of places but he has a thing about painting a series of 100 paintings on the history of India. He is working like never before and he just wants to work," Owais said.

Husain, who shuttles between Dubai and London, went in exile after a hate campaign was launched against him in 2006 over his controversial paintings.

Several cases were filed against him by people protesting his portrayal of Hindu goddesses in the nude. His house in India was attacked and art works vandalised by fundamentalists.

Husain's son, however, refused to comment on statements from India on Thursday that he was welcome to come back.

"I don't know much about those comments. He is the best person to answer that question," Owais said.

The Indian government on Thursday described Husain as the 'pride of India' and said it was willing to provide security to him.

"There is no case against M F Husain. Supreme Court has quashed all the cases against him," Union Home Secretary G K Pillai said in New Delhi.

He said the government was ready to provide security to the artist, if he planned to return to India.

"He (Husain) is the pride of India," Foreign Secretary Nirupama Rao said adding, "I would like him to feel safe and secure in India."

Is Husain the biggest danger to the art summit?