'Maoists have totally militarised themselves' 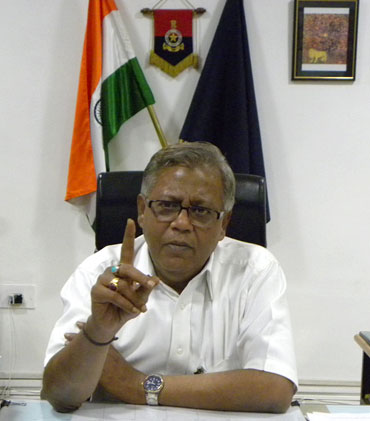 This is the worst Maoist attack against the security forces after Operation Green Hunt -- a combined effort by the Union and state government -- began to counter the Maoists, the ultra-left insurgent group also known as the Naxalites.

Vishwa Ranjan, the director general of police, Chhattisgarh, says the Maoists have moved from guerilla tactics to militarised warfare of platoons and companies.

A former intelligence officer, with 23 years of experience in dealing with the Maoists, Vishwa Ranjan considers the Constitution as one of his ideals and believes the Naxals will be defeated in 3 to 5 years in his state.

"I don't think there is any time frame. If you keep on increasing the force levels in a graded manner -- as far as my state is concerned -- anything between 3 and 5 years. It is linked to good paced development and sustaining it. You cannot relax, you have to be on your toes even if they leave this area and go," he said in a lengthy interview recently at the police headquarter in Raipur. The first of a three-part interview with rediff.com's Archana Masih.

Do you think the Naxalites are for an all out war?

All out war is what they are saying and they have grown. What the home secretary, Government of India, said of their plan of 2060 is in their document (of overthrowing Indian democracy by 2050-2060) and they are moving.

In Uttarakhand, every district has Naxalites. The first level of activity is already surfacing there. They are not committing any violence at the moment so people don't care. In the second stage, violence will start taking place at the third stage, they will start getting militarised.

Is a military/security operation the way the only way to tackle the Naxal problem?

There are different stages of the movement where you can tackle it differently. At a stage when they have totally militarised themselves, when they say that a protracted, violent, armed way is the only way to capture power, when they are trying to change themselves from a guerilla to military platoons and companies, where they are trying to go on what they call mobile warfare -- then what is the way out except confronting them as a state.

Have the Maoists moved beyond being just a guerilla force?

They've said that their next stage will be a positional war, where they will take positions like the army. Mobile warfare is not guerilla tactics, 200 people don't do guerilla warfare. There are different stages, like in Uttarakhand, they haven't been militarised so much, but subsequently they will.

In Bastar, apart from the police, how far does the reach of the state administration reach?

About 40 to 45 per cent of Bastar is still with the police, where the police and administration is present. There is another 30 per cent that we dominate, but we will not say that they can't come and disturb you, they can. The rest 30 per cent, is dominated by them but we can enter and hit them like Abujmarh (a densely forested area in Bastar).

In Abujmarh we are entering and hitting their camps but we have to come back because we can't hold on with small forces. The major battles with the Naxals take place in the area which is in the periphery of our and their domination. But that is only because of the paucity of force. The moment we have more force, we will enter those areas. So when you have less forces what you do is keep making forays and disturbing them so that they are always on the run.

With the central forces coming in to the state, do you have enough forces now?

Still it is much less. And I don't blame the Centre because it suddenly cannot give you force immediately. Some forces will be locked in the Northeast, some in Kashmir, some someplace else -- and then that force has to be reoriented to fight this kind of battle.

As a police officer, how do you react to the recent Naxal offer for talks with the government?

If you read Mao and there are people following Mao to the last details then Mao has accepted very few areas where they can go for a talk. It must always be of tactical advantage to them only then you go for talks.

If your forces are in disarray then you make that offer but you don't take a decision, you keep on delaying the talks and make some excuse and say that the talk has failed and use that time to consolidate.

This is what they tried to do with Andhra. The other place Mao says you can go with negotiation is when the enemy is very strong but you want to use that opportunity to come to a temporary understanding so that you can penetrate various segments of the enemy.

Third, he said you become friends with the enemy when both of you are faced with a third enemy. The only problem is if we waste a lot of time in talking to them and they consolidate and hit back, then what do you do?

But as a democratic system we cannot say we won't talk but there has to be a watermark accepted by both. There can't be no watermark. As a police officer who owes his allegiance to the Indian Constitution I find it very difficult to talk to a person who ipso facto says he does not believe in the Constitution.

How do I defend talks with a person who says that when I have taken an oath to protect the Constitution of India?

What would this watermark be?

You feel the offer for talks is to re-strengthen themselves and buy time.

They'll buy 5, 6 months, they know decisions will not take place immediately. The Andhra talks after all went on for seven months before it collapsed. Even in Andhra they kept on saying that violence is non negotiable, so how do you then talk to them?

What happened was the interlocutors who were doing this -- because the Naxals will never talk themselves -- they kept on saying we will convince them. You accept these things and we will make them understand the other part so they need time and all that. So that is the problem.

If a person has read Mao well knows that a group that only believes in Maoism and Maoist strategy will not say anything without a plan.

Did not the Centre step in so that a determined effort could be launched because the state police was unable to tackle the Maoists?

It was the Centre's response to all Naxal-affected areas. It was always a point of when you can gather that kind of force. It was not as if the Centre was not aware, like I said there is no magic wand by which you can create force. Force creation, training etc takes time, even if you have enough forces deployed in an area you cannot withdraw it and create a vacuum in that area.

Part II: 'Road mines and ambushes cause us most casualties'
Part III: 'Tribals don't have sympathy but fear for Naxals'