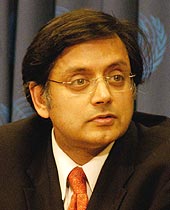 After creating a controversy by his 'cattle class' remark, Union Minister Shashi Tharoor has now complained about his workload while tweeting about 'ridiculously full' engagements.

'Have a ridiculously full schedule tomorrow with 17 meetings/engagements. You always pay a price when u come back from a trip,' the minister said last night in the latest posting on the social networking site. The minister of state for external affairs, who arrived in New Delhi after a six-day tour of Liberia and Ghana, also talked about "mountains of pending files" as he was away from office for almost a week.

'Long day catching up with a week's absence from Delhi. Mountains of pending files. Two journalists actually interviewed me on Africa!,' he wrote in another posting. The latest postings came after his meetings with Congress president Sonia Gandhi and Prime Minister Manmohan Singh to give an explanation over his "cattle class" remark after which he was told to refrain from making such comments.

Tharoor had ruffled feathers in Congress when he twitted that he would be travelling in "cattle class out of solidarity with all our holy cows", a comment which was seen as ridiculing the party's austerity measures.