Holy cow! Congress and the power of 71 characters 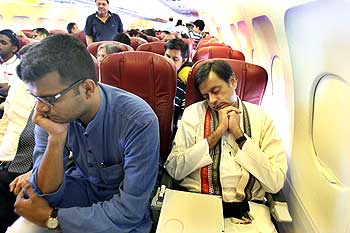 Prem Panicker asks why the Congress party and the media are getting into a lather over Shashi Tharoor's tweets.

The way the Congress party bristles over what is a harmless post on social networking site Twitter, you would think its symbol was the porcupine.

To fully appreciate the ridiculousness of a brouhaha that is already four days old and counting, consider the posts that led to it:

At 11.27 in the morning of September 14, veteran journalist and rediff.com columnist Kanchan Gupta asked Minister of State for External Affairs Shashi Tharoor a question: 'Tell us Minister, next time you travel to Kerala, will it be cattle class?'

Twenty minutes later the minister, an inveterate user of Twitter, responded: 'Absolutely, in cattle class out of solidarity with all our holy cows!'

Twelve words -- or, in Twitter measure, 71 characters -- that have led to a veritable storm that, despite Tharoor's September 18 apology, continues to be 'Breaking News' on our television channels, fuel endless 'debates' on prime time, and get considerable ink from both reporters and commentators in the national media.

The wit in Tharoor's response is of the collegiate variety, but that is no reason to set off a tsunami. Yet the party, led by resident cactus Jayanti Natrajan, got very prickly about how the phrase 'cattle class' denigrates the average Indian. How so?

In any event, what is there about the phrase 'cattle class' to have everyone's quills standing on end? Tharoor made the remark on September 14, but he has been travelling economy class well before that; The Times of India featured rediff.com contributor Jay Mandal's picture of the minister crumpled up in sleep in an economy class seat August 9, which we you can see alongside.

So you could argue that if the reference is derogatory, he includes himself with the rest of the great unwashed masses, and is at best guilty of denigrating himself along with the rest.

If 'cattle class' is in fact derogatory, it is the airlines -- who have over time reduced leg room to non-existent levels in order to pack in more people -- who should take umbrage, for it is airlines that are treating us like cattle, a point Tharoor made in his September 18 apology.

That is why I suspect the outrage various Congress spokespersons have expressed is disingenuous. It is not 'cattle class' that bothers them, it is the other phrase: 'Holy cows' -- only, they don't have the courage of conviction to come right out and say that they are outraged over the perceived insult to 'Madam'.

Consider again the date of Tharoor's post: September 14. Something else happened that morning: Sonia Gandhi flew economy class from New Delhi to Mumbai. It is a commonplace occurrence in your lives and mine -- but when Sonia Gandhi travels economy, the presses are stopped and it becomes 'breaking news'.

The minister was likely being randomly flip, and giving free rein to a sense of humoUr honed in the halls of St Stephen's -- but for the sycophantic rabble that makes up India's ruling party, this was lese majeste magnified to the max.

[It is a different thing altogether that Sonia's gesture was futile -- she was in Mumbai to attend a party event and not on government business; yet half the government and a sizeable proportion of the police had to be deployed for her reception and her security. Whatever 'Madam' saved flying economy, she wasted thrice as much in the multi-car cavalcade, in the man hours of hundreds of police and all the rest of it -- so what price austerity, Mr Pranab Mukherjee, sir?]

And therein lies the hypocrisy of Jayanti Natarajan and her fellow porcupines -- in true 'more loyal than the king' fashion, they take umbrage where none was intended. But rather than come right out and protest the 'insult' to their totem, they use the common man's ostensibly wounded sensibilities as a fig leaf to cover the real reason.

A question: In the days since September 14, have you heard of one 'common man' or common woman even, getting his or her truss in a knot over Tharoor's remark? No, because the common man/woman/person has much larger issues to worry about -- unlike some of our elected representatives.

The Congress spent much of 2008 being serially embarrassed by the BJP, the Left and others. Now that the Left has been silenced by the electorate and the BJP has its hands full with Mohammad Ali Jinnah and Jaswant Singh, it appears the ruling party in a spirit of political accommodation is busy embarrassing itself.

While on that, consider the heights to which sycophancy is taken within the party. On the same flight as Sonia was Bhiwandi MP Suresh Tawre, who was seated in business class. When he saw his party chief walking into economy he panicked, and hastily switched seats with another passenger.

Was austerity the point of the exercise? Certainly not -- the business class ticket had in any case been paid for. But in the monkey-see, monkey-do culture the Congress fosters, it would have been impossible for Tawre to continue sprawling in business class while his 'Madam' sat within the cramped confines of 'economy class'.

So he made the grand gesture -- and contemporary politics is nothing if it is not about empty gestures.

The only ones to benefit is the media, especially television. One night, one television channel hosted a breathless debate on the 'issue' of Tharoor's 'Twittering' [the highlight, for me, was a Congress spokesperson, Tom Vadakkan, pronouncing judgment on Twitter as a site for lonely people, as if his startling 'insight' had anything to do with the question]. And the next night another channel, not to be outdone, will debate the 'issue' in its turn.

So that is what we have -- a thin skinned ruling party peopled by tiny minds that cannot encompass a little harmless self-deprecation, and a media that is so devoid of issues, it debates a 71-character post as if the future of the nation hangs on the outcome.

Ironically, the severity of the Congress reaction -- the party says it will take 'disciplinary action' at the right time -- transforms a harmless joke into tangible reality.

After Modi, Rajinikanth to feature in 'Man vs Wild' 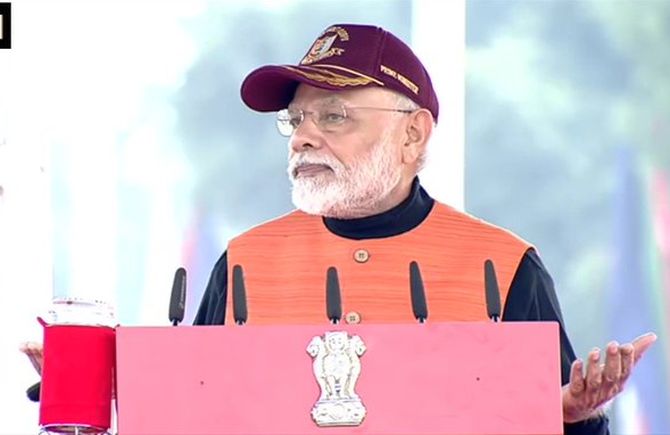 SC to rule in 10 days on allowing women at shrines

When smugglers wanted to buy a helicopter

Spotted an extravagant politician? Snap him!