Austerity again: No caviar, costly biscuits on Air India One 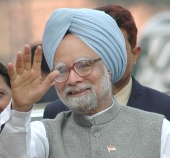 With austerity being the buzzword in India's corridors of power, it seems that every area of government-public interaction is being hit by the bug.

News is already out that the Prime Minister Manmohan Singh's delegation has been pruned for his trip to Pittsburgh, to attend the G20 summit, via Frankfurt in Germany.

That, it seems, is not enough! The staff on Air India One, the prime minister's official aircraft, were reportedly given advance instructions to trim the contents on offer in the official menu.

Following the order to a tee, the staff did not serve expensive biscuits and eliminated caviar, but in a concession to the media accompanying the delegation, served all those on board the choicest of liquor en route to Frankfurt, where there will be an overnight halt.

It is expected to be extended to all Members of Parliament following an all party meeting, sources say.

Vice President Hamid Ansari will call an all-party meeting to decide on the issue after Lok Sabha Speaker Meira Kumar returns from Rome, inside sources said.

Following the top party leaders' much publicised economy class flights and train rides, the UPA had requested Rajya Sabha and Lok Sabha chairpersons to convince all MPs to join the austerity drive.

The chairman of the Rajya Sahba and the Lok Sabha speaker are expected to hold a discussion on the austerity drive. The move to promote austerity comes in the wake of the country experiencing a crippling drought.

The Congress party has already advised its ministers and lawmakers to donate 20 per cent of their salary towards drought relief.

They have also been told to travel economy class and not hold press conferences in five-star hotels.