No Chinese conspiracy in attack on Indian priests: Nepal 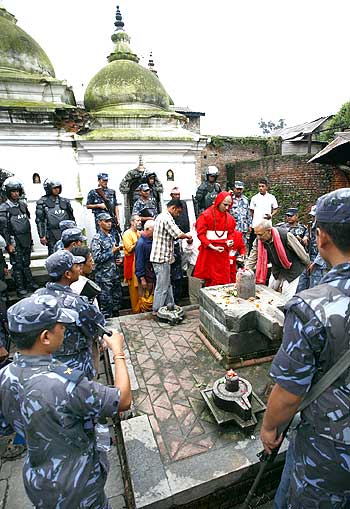 Nepal on Monday dismissed suggestions of any 'Chinese connection' behind the recent Maoist attack on two Indian priests of the Pashupatinath temple.

Deploring the incident that took place at the temple premises on Friday, Nepal Culture Minister Minindra Rijal told an Indian private news channel, "It's very clear that they (Maoists) are involved."

However, when asked about the suggestions of a 'Chinese angle' and reports that pro-China Maoists were behind the attack, he said that inventing a 'conspiracy theory' is not going to help the government.

The Indian priests, Girish Bhatta and Raghavendra Bhatta, both 32 and hailing from Karnataka, were assaulted, their clothes torn and their sacred thread cut by a group of 40-50 Maoists, who stormed the temple on Friday protesting their recent appointment.

The Indian government has condemned the attack on the two priests as an 'unprovoked and criminal' act.

Image: Raghavendra Bhatt (in red), is escorted by security personnel while offering prayers in the premises of Pashupatinath temple in Kathmandu | Photograph: Shruti Shrestha/ Reuters

As Yogi in poll fray, Hindu Yuva Vahini back in action

SC order is a tight slap for MVA: Fadnavis

'My father is a shaheed. He kept country above self'

Why Bihar's Jobless Youth Are Angry