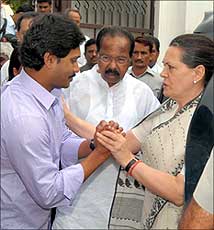 The muscle-flexing by 140 Members of Legislative Assembly of the Congress in Andhra Pradesh, demanding the appointment of late AP Chief Minister Y S Rajshekhara Reddy's son Jaganmohan Reddy as the next CM, has come as a rude jolt to the Congress leadership, according to highly placed sources in the party.

The party has realised that the entire power structure in a state should not be handed over to one individual or faction, and this is likely to be reflected during the ticket distribution process for the upcoming assembly polls in Haryana and Maharashtra.

Congress president Sonia Gandhi is being credited with the view that there should be a balance in the distribution of tickets, so that senior leaders get their fair share of nominees and the loyalties of those who win and are re-elected, get evenly balanced.

A senior functionary of the All India Congress Committee said that the party leadership does not want a repeat performance of Andhra Pradesh, where the majority of
the MLAs are bent on showing their loyalty to the deceased chief minister and his family as they owe much of their political growth and rise in power to him. In Andhra, Rajasekhara was in charge of nominating the Members of Legislative Council and even the members of the Rajya Sabha from the state, making it into a virtual one-man show.

In Haryana, where Chief Minister Bhupinder Singh Hooda is trying to procure tickets for his nominees, it would be difficult for the CM to completely have his own way. To ensure this, AICC General Secretary Hari Prasad has now been included as a member of the screening committee for the state. He is a grassroots leader, who is known to play fair and is not aligned to any particular camp, unlike other senior leaders of the AICC.

Incidentally, Haryana Finance Minister Birender Singh, who is considered to be an arch rival of Hooda, is contesting the MLA election and has also been made the chairman of the screening committee for Maharashtra. Because of his post, Singh will have access to Sonia Gandhi and will be able to articulate complaints or shortcomings. His observations will also carry weight with Minister of State in the Prime Minister's Office Prithviraj Chavan, who would want to assign seats to his own people in some areas of the state, particularly his parliamentary constituency.

Similarly, in Maharashtra, where there is no paucity of senior leaders, a new mechanism is being evolved. Chief Minister Ashok Chavan will not be walking away with the bulk of the tickets but tickets will also be allotted to factional leaders, as an unstated policy of
the party leadership.

A senior leader pointed out that former prime minister Indira Gandhi had a system of checks and balances, where absolute power was not entrusted to any one leader or group. But the process began changing when the chief ministers of the various Congress-ruled states were given absolute power to call the shots while AICC general secretaries, who are supposed to report any digressions to the party leadership, became apologists and torch-bearers for the CMs.

Another leader admitted that the present state of affairs had arisen because many of the AICC functionaries did not have the stature or the political weight to keep the chief ministers in check. To resolve the crisis, which has now engulfed the Congress unit of Andhra Pradesh, the party leadership will have to suitably adjust 'the heir to the YSR throne', possibly in Delhi.

A senior leader like Finance Minister Pranab Mukherjee is likely to be deputed to handle the MLAs and crack the whip once the mourning period ends on September 10. Mukherjee, considered the Congress' and the United Progressive Alliance government's trouble shooter, is often used to defuse politically critical situations.

We must abide by Sonia's decision: Jagan tells supporters