If situation improves, army will return to barracks: J&K CM 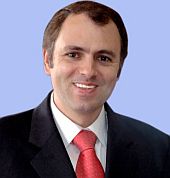 Warning that vested elements were hell-bent on creating an atmosphere of mistrust against the army and advocating revocation of Armed Forces Special Powers Act (AFSPA), Jammu and Kashmir Chief Minister Omar Abdullah on Sunday said the army will return to its barracks only when the situation improves in the state.

"Stay of the army depends on the ground situation and as the situation improves the army will definitely go back to barracks in Jammu and Kashmir," Abdullah said while addressing a 'Fauji Mela' organised by the 25 Infantry Division in Rajouri.

Without pointing to any political party or organisation, he alleged that some vested elements were hell-bent upon creating an atmosphere of mistrust against Army and advocating revocation of Armed Forces Special Powers Act and recalling army back to barracks.

It may be recalled that opposition Peoples Democratic Party and separatists have been demanding revocation of the AFSPA and Disturbed Areas Act (DAA) in Jammu and Kashmir and subsequent troops withdrawal from the state.

"But the army maintained its dignity and addressed the misunderstanding with civilians in close coordination with civilian administration," the chief minister said.

Appreciating the services rendered by the army, Abdullah said it has not only defended the country but maintained army-civilian cooperation right from 1947.

"The army has always helped the civil administration during crises, whether it is a natural calamity or any law and order situation," he said.

PM to decide over AFSPA: Ansari