Sign in  |  Create a Rediffmail account
Rediff.com  » News » Irom Sharmila, has been fasting for 9 years against a controversial law

Irom Sharmila, has been fasting for 9 years against a controversial law 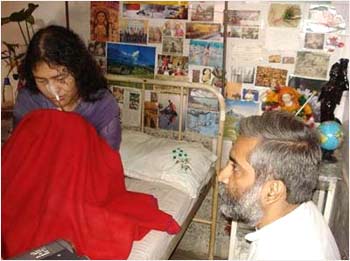 Image: Irom Sharmila with Magsaysay Award winner Sandeep Pandey
Photographs: Rediff Archives
Irom Sharmila has been on an indefinite fast since November 2000 to protest the killing of innocent people by security forces in Manipur. She has been arrested innumerable times and nasal fed forcefully, but the young woman has continued her protest to demand the repeal of the Armed Forces Special Powers Act, a controversial law promulgated to curb insurgency in the state.

Deepti Priya Mehrotra has documented her struggle in her book Burning Bright: Irom Sharmila and the Struggle for Peace in Manipur from which we publish the following extract:

It is March 2007, and spring is in the air. Bees and butterflies hover around fragrant white flowers of the china orange tree next to my window. Kites and crows fly overhead, bulbuls and sparrows twitter near at hand, searching for safe places to nest. Fresh green shoots come up on the fern I thought was dead. All winter I have hardly watered the lawn, yet the grass is indescribably lovely. I think of Irom Sharmila Chanu, a tall slim woman, intelligent as can be who became my friend during four winter months.

Irom Sharmila, a young Manipuri, has been on indefinite fast since November 2000. She is fasting to protest the killing of innocent people by security forces meant to protect them. She is opposing the Armed Forces Special Powers Act (AFSPA), a law promulgated to curb insurgency in the state. Under this law security personnel can shoot and arrest anybody, and raid premises, upon mere suspicion of insurgency. They often target ordinary people, misusing these special powers. Newspapers report innumerable incidents of false encounters. Human rights organizations have documented hundreds of cases of killing, arrest, rape and torture of innocent people.

People throughout Manipur live in a state of fear: on the one hand they fear insurgents, on the other hand security forces. A cycle of violence has been set up by these two groups. Caught in the crossfire, ordinary people in this beautiful state have lost all semblance of normal life. Rather than being an effective counter-insurgency measure, AFSPA is in fact encouraging growth of insurgency.

In November 2000, ten innocent people were mowed down by security forces in Malom, a village near Imphal. Irom Sharmila, who hails from a very ordinary family of Imphal, could not accept the situation. In response to this tragedy, she sat on hunger strike her demand: withdrawal of AFSPA from Manipur. She refused to eat until and unless this draconian legislation was removed. Later in the same month the government arrested her, and began force-feeding her through a nasal tube. She has been released, and re-arrested, innumerable times since then. For over eight years now, she has stood by her demand, refusing to eat. She has spent most of these years alone in jail, in Imphal. 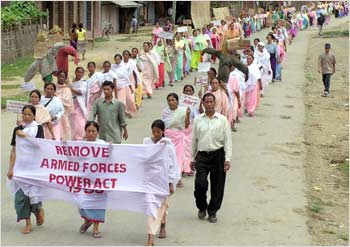 Image: Villagers protest against the controversial Armed Forces Special Powers Act in Manipur
Photographs: Reuters
I think of Irom Sharmila's sensitive eyes, questioning look, and a delighted smile waiting to break out. Yet her sorrow is pervasive, deep. With wisdom beyond her years, she has decided to act an original move aimed at changing, against all odds, the course of history.

At the age of thirty-seven, she is a name of reckon with. Newspapers and journals have dubbed her 'The defiant Lady', 'The Iron Lady of Manipur', 'youth icon', 'a satyagrahi' and 'an Unlikely Outlaw'. One individual, she has taken on the might of the state.

Ordinary people rally around Irom Sharmila. She draws power from her unwavering resolve. Her commitment is total, her will strong as steel. She says, 'I am doing my bounden duty I am a rational being, acting on my conscience.'

When I first met her, on 5 November 2006, I did not know I would one day write about her. I was unaware that she has so many words to share. I went simply to pay homage to a person of great courage, who had been on indefinite political fast for an unbelievable six years.

The previous day, an email, marked 'Action Alert', arrived in my inbox, sent by one Onil K, diverted to me by a colleague in Delhi University. The Alert read, ' We are looking for female volunteers to stay with her for a minute or hour or day or night as a kind gesture to show support to her non-violent movement. Presently she is in Delhi, AIIMS hospital, New Private Ward, Room #57, under police custody charged under section 309: attempt to commit suicide. Only one female is allowed to stay with her by the police. She is quite alone in the hospital under police surveillance and still not giving up the fight.'

I imagined her weak, lying down, turned towards the wall, with barely any energy left. But I found her filled with vitality self-illuminated. She was keen to converse and talked about many things. She related how she had flown from Imphal to New Delhi after being released from jail (in Imphal) on 3 October. She recounted her experiences while in New Delhi.

Several weeks later, after she and I had met many times, I told her I would, someday, like to write about her. She smiled indulgently. She had just read a short account about a peasant freedom fighter called Jaggi Devi, and felt a sense of resonance with that passionate crusader. She urged, 'You must write a book. A book has a lot of power. If it is a good book. More and more people will read it. It will be in the libraries. People will read it for research. Writing a book is very important.'

Sharmila represents, and in many ways is, the ordinary person 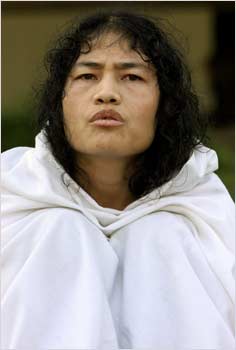 Image: Irom Sharmila
Photographs: Vijay Mathur/Reuters
Later I go to Imphal to meet her; she is kept in judicial detention, in virtual solitary confinement, and force-fed. I meet her family, in their village on the outskirts of the city: her mother Shakhi Devi, grandmother Tonsija Devi, brothers and sisters, aunts and uncles, nieces and nephews.

There is her wider family too human rights activists, lawyers and ordinary people. A scooter-rickshaw driver is reluctant when I ask him to take me to Kongpal Kongkham Leikai, but when I add it is Irom Sharmila's family I am heading towards, he sparkles with readiness. 'Sharmila Didi!' he intones with wonder and pure affection.

Her struggle touches and connects, in its stark simplicity, with common citizens, and not just in Manipur. Thoiba, a research scholar in Delhi University, muses, 'Sister has now become the sister of everybody in the world.' Radha, an undergraduate in the same university, confides, 'After meeting her, for the first time I feel proud to be an Indian.'

Sharmila represents, and in many ways is, the ordinary person. This is precisely what makes her extraordinary. She speaks for many whose voices fade into oblivion, routinely unheard. In the present era of ruthless maldevelopment, militarisation and abuse of power under guise of democracy and welfare, she stands for honest truths, stark and unadorned.

Her stand reiterates, in an idiom quite different from the academic or technical, the importance of human dignity, freedom and cultural integrity, and poses what is in essence a civilisational challenge. The direct arena is political, but the challenge is posed at multiple levels. 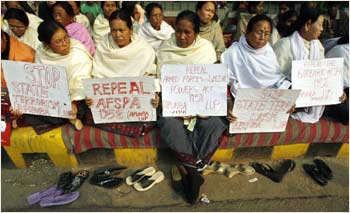 Image: Women hold placards during a protest against the Armed Forces Special Powers Act in New Delhi
Photographs: Adnan Abidi/Reuters
Irom Sharmila's fast has stretched over eight years, may carry on for many more. Her protest is an uncompromising call to the conscience. Authorities dub her a 'habitual offender', arresting her for attempted suicide. They know it is a false charge, for Irom Sharmila is not fasting unto death. Rather, she is fasting unto life, to remove a brutal law that allows the murder of innocent people.

She will neither compromise, nor give up the fight halfway. In staking a claim to peace as a basic right due to all people, she has become a symbol, an icon and an inspiration. The symbolism is powerful in its surrealism. The everyday mixes with the exceptional, the imagined with the unimaginable. She is down-to-earth and matter-of-fact, yet her act of daring is, literally, unthinkable for the rest of us. Her chosen path is original, uncompromising and very tough.

She has decided to sacrifice 'normal' life for the sake of a higher cause. By refusing to accept status quo, compromise and get on with life, she has redefined the 'normal'. Her sacrifice speaks louder than words, insisting: It is not normal for ordinary people to be killed in the name of law and order. It is not normal for us to look the other way. When innocent people are killed in the name of justice by a state that claims to be a democracy, it is not normal to ignore the violations, and just get on with one's own life.

She lives close to the bone, as close to her beliefs and convictions as is humanly possible. By withdrawing from the natural activity of eating food, she draws attention to her reasons. We understand that she refuses to condone abnormal levels of violence, and pretend that all is well with the world. She allows her deepest aspirations to guide her decisions, and organise her life. As such, she has become an abiding inspiration. She stakes no claim to being a yogi or a saint: she is a mere mortal, like any of us.