Operation against Taliban to go on despite attacks: Gilani 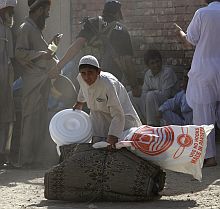 Pakistan's military operation against the Taliban in South Waziristan will be taken to its logical conclusion despite a wave of attacks by the militants as 'failure is not an option,' Pakistan Prime Minister Yousuf Raza Gilani said on Friday.

Addressing a high-level meeting convened to frame a strategy to counter a series of suicide attacks and bombings unleashed by the Taliban, Gilani said his government is committed to 'uprooting militancy and intolerance from society and all those who challenge the writ of the state will be dealt with an iron hand.'

"Failure is not an option despite the ferocity of these attacks (by the militants)," he said hours after a suicide bomber struck a strategic air force complex in Punjab province and a car bomb targeted a restaurant in Peshawar, killing eight persons and injuring nearly 30 more.

"The military operation in South Waziristan will continue till its logical conclusion," Gilani said. He assured the people that the government 'will not allow the terrorists to get away with their cowardly acts.'

The meeting, which was attended by senior federal ministers, provincial chief ministers and officials of the police and law enforcement agencies, was briefed by army chief General Ashfaq Pervez Kayani on the military operation in South Waziristan.

Kayani said the offensive, launched over the weekend, is 'moving ahead successfully towards the desired objective while trying to ensure minimum collateral damage.'

The military says over 150 militants and 20 soldiers have died so far in the fighting. Over the past two weeks, scores have died in bombings and suicide attacks that have mainly targeted security facilities, including the army's General Headquarters.

Analysts believe the Taliban has resorted to such acts to pressure the government into calling off the operation in the tribal belt. The meeting discussed immediate and long-term measures framed by security agencies to eliminate terrorism and extremism from the country.

It also reviewed the strategy drawn up by intelligence and law enforcement agencies to make the operation in South Waziristan a success, said a statement from the prime minister's office without giving details.

Gilani made it clear that the operation could involve significant casualties. "The challenges are great and possibly the sacrifices may be higher, but the leaders and people should forge unity in their ranks and have faith and patience to surmount this challenge," he said.

The premier noted that there is a 'nexus between the militants and some of the terrorist organisations' and directed provincial and federal intelligence agencies to strengthen their network and 'closely monitor and watch the activities of these organisations.'

The requirements of all agencies involved in the campaign against militants will be met on a priority basis, Gilani said.

The premier said the earlier military operation against the Taliban in Swat valley had been successful due to the 'complete consensus and political will displayed by all parties, including the opposition.'

The need for such consensus is 'all the more vital today as we tackle the militants in their own backyard, i.e. South Waziristan," he added. Gilani called on political forces, public representatives and opinion leaders to mobilise public opinion for 'national unity on the most significant challenge to the national security.'

The country is fighting 'a war to free the nation from the menace of terrorism that has destroyed the peace of the land, bruised the economy and most importantly threatened the freedom of our people,' he said.

A sum of Rs 50 billion has been earmarked for rehabilitating people displaced by the fighting in Swat and more resources will be required for the relief of almost 120,000 people who have fled South Waziristan due to the fighting.

Image: A boy fleeing the military offensive in South Waziristan carries his relief supplies at a distribution point for IDPs in Paharpur on Friday