News
Business
Movies
Sports
Cricket
Get Ahead
Money Tips
Shopping
Sign in  |  Create a Rediffmail account
Rediff.com  » News » US may be aware of Osama's whereabouts: Qureshi

US may be aware of Osama's whereabouts: Qureshi 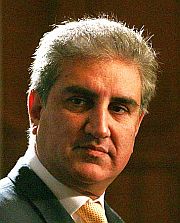 Interacting with mediapersons in Washington, Qureshi said the US troops, engaged in a gruesome battle in Afghanistan, are equipped with sophisticated, state of the art technology and weapons hence they may be aware about Laden's whereabouts.

"US may be aware of the whereabouts of Osama bin Laden," The News quoted Qureshi, as saying.

The Obama administration maintains that Laden along with other top Qaeda and Taliban leaders are hiding in Pakistan's ungoverned tribal areas along the Afghan border.

"In the FATA (Federally Administered Tribal Areas), the western part of Pakistan in the mountains on the Afghan border, that is a war on terror. That's where Al Qaida lives. That's where bin Laden is. That's where the most radicalized part of the Taliban is," US Vice President Joe Biden, had said days ago.

Biden said Al Qaeda had reconstituted itself in the mountain regions along the Afghanistan-Pakistan border under the Bush administration, which was a matter of great concern.

Deputy Chief of the Mission, US Embassy, Gerald Feierstein, recently, had said Laden was alive and has taken refuge in Pakistan.

"Osama is present in Pakistan. The command system of Taliban is based in Quetta and they are launching their activities from the suburbs of the city," Feierstein said.

However, Pakistan has brushed aside Feierstein's statements terming them as 'baseless speculation.'

Pakistan Foreign Office spokesman Abdul Basit said the US should share evidence with Islamabad regarding bin Laden's presence in Pakistan.