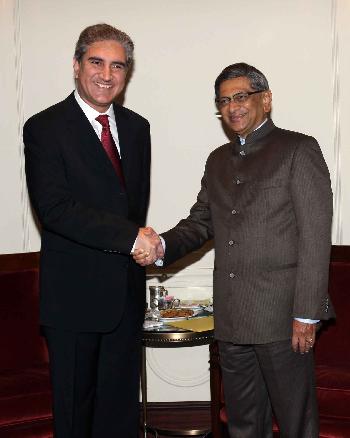 India on Sunday rejected any back-channel talks with Pakistan and said no meaningful bilateral dialogue can take place unless that country took action against the Mumbai attack suspects.

External Affairs Minister S M Krishna articulated India's position during his talks with his Pakistani counterpart Shah Mahmood Qureshi in the first highest-level contact between the countries since their Prime Ministers met at the Egyptian city of Sharm El-Sheikh in July.

Krishna said he told Qureshi that India said was concerned over the terror threat still emanating from the soil of that country.

"We have a great concern about the groups operating from Pakistan. We conveyed this to Qureshi about the threats posed to India from of Pakistan soil, Krishna told reporters after the talks held on the sidelines of the UNGA Session.

Asked about the talk of Pakistan mulling backchannel diplomacy," Krishna said, "When front channel is open what is the need of back-channel. We have understood each other. Our position has been understood."

Pakistan has proposed making former foreign secretary Riaz Muhammed Khan as its special envoy for Indian affairs.
"Well this question did come up."

Had a candid talk: Krishna

Asked about the atmosphere at the keenly-awaited talks, Krishna said he and Qureshi had "useful and frank" exchanges.
Asked why India was putting pre-condition for resumption of the stalled composite dialogue, Krishna said, "I do not think we are not in a position for a dialogue. The question is the quality of the dialogue."

"I do not think that we are in a position to go that long," Krishna said when asked about the resumption of composite dialogue.

"Since, I have just concluded a detailed meeting with the Foreign Minister Quershi, the question is of quality of the dialogue and how meaningful the dialogue is."

"We have a legitimate concern that groups operating out of Pakistan, tend to pose a great danger to our country and to our nationals. I conveyed to the foreign minister Qureshi that the dialogue process needs an environment free from the threat of these terrorist groups," Krishna said.

Krishna said Qureshi told him that the trial against the Mumbai attack suspects would start shortly and that justice would be done.

"We would be monitoring the developments in this regard carefully," he said, adding "concrete and effective steps against these individuals can instill in us the confidence in us that Pakistani soil would not be used against India."

Krishna said Hafeez Saeed issue also came up during the talks. India is pressing for quick action by Pakistan to go after Saeed, the mastermind behind the Mumbai attack.

The minister said Qureshi did not insist on fixing a date for resumption of composite dialogue.To a question, Krishna said the Balochistan issue did not come up during the talks.

Asked about Afghanistan, Krishna said, "As far as Afghanistan is concerned, India has gone there to help in the reconstruction of Afghanistan on their invitation. And we stop at there, there is no agenda for India in Afghanistan, other than help them out in rebuilding."

On the non-proliferation issue, he said India's record is exemplary.

"Even though we are not a member of the Non-Proliferation Treaty, we have always approached the non-proliferation issues with the highest sense of probity. This is in contrast of the record of others. However, we believe that non-proliferation can't be an end in itself, it has to be linked to an effective nuclear disarmament," he said.

"India remains committed to the goal of universal non-discriminatory and complete elimination of nuclear weapons. In this context we welcome the renewed global effort in achieving a world free of nuclear weapons," he added.

Krishna said, "As far as the resolution in the Security Council is concerned, the views of India on this are well known. We have international agreements in place of civil  nuclear cooperation of the United States and the international community. We have also been assured by the US that their resolution is not directed towards India."

Image: Krishna greets Qureshi at the New York Palace hotel on the sidelines of the UN General Assembly.

PM meets Zardari, asks him to act against terror