PM meets Zardari, asks him to act against terror 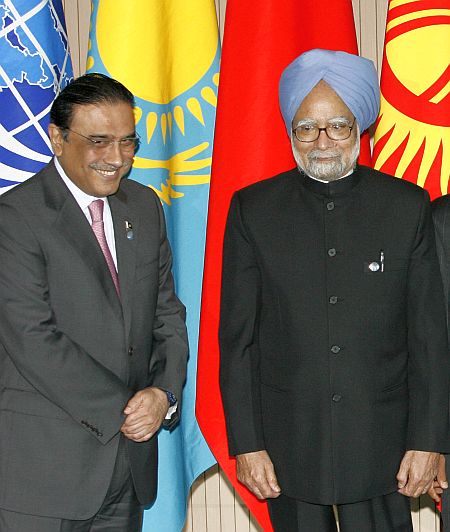 In the first top-level contact since the Mumbai terror attacks, Prime Minister Manmohan Singh met President Asif Ali Zardari on Tuesday during which he is understood to have made it clear that Pakistan should take concrete action against terrorism directed against India.

Singh, who arrived here on a three-day visit, met Zardari on the sidelines of the Shanghai Cooperation Organisation summit.

Ahead of their meeting, the two leaders shook hands when they came face-to-face after posing for a group photo with leaders of other SCO member nations --  Russia, China,

Kazakhstan, Tajikistan, Kyrgyzstan, and Uzbekistan. India, Pakistan and Iran are among the nations who have observer status in SCO.

During his meeting with Zardari, Singh is understood to have conveyed India's "unhappiness" over Pakistan's inaction against terrorism directed against India.

The prime minister is also understood to have expressed disappointment over the release of the Jamat-ud-Dawa chief Hafeez Mohammed Saeed, who is believed to be one of those who had masterminded the 26/11 attacks.

Get Rediff News delivered into your Inbox.
Ajay Kaul in Yekaterinburg (Russia)
SHARE THIS STORY
Print this article