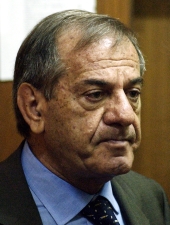 The Central Bureau of Investigation on Saturday filed an application before a Delhi court seeking closure of the Bofors pay-off case against Italian businessman Ottavio Quattrocchi. In the plea filed before Chief Metropolitan Magistrate Kaveri Baweja, the probe agency said all efforts to extradite Quattrocchi for facing the trial in India has failed.

The agency opposed the plea of advocate Ajay Agrawal, who had filed an application in his personal capacity, pleading the rejection of the closure report, on the ground that he has no 'locus standi' to intervene in the matter.

Additional Solicitor General P P Malhotra said the court has a limited role in deciding the fate of the application and the CBI's plea can only be turned down on the ground that it has been filed under extraneous considerations and the investigating agency has not applied its mind.

Quattrocchi, the sole surviving accused in the two-decade-old case after the Delhi High Court quashed the charges on May 31, 2005 against the other accused, has never appeared before any court in the country.

The CBI contended that the continued prosecution of Quattrocchi was 'unjustified' in the light of various factors including the failed attempts to extradite him. Malhotra further said that all the other accused are either dead or charges against them have been quashed by the Delhi High Court.

"I find that the continuance of the prosecution against Quattrocchi will be unjustified. It is considered expedient in the interest of justice that the proceedings against him should not be continued and be withdrawn," the ASG said.

The nine-page application filed by the CBI said, "It is humbly and respectfully prayed that the court may consent to the withdrawal of the case."

Advocate Agrawal, who has been pursuing the case in the Supreme Court and had approached the trial court against the CBI's move to seek closure of the case, contended that the Centre and the agency were trying to close the case despite having sufficient evidence against Quattrocchi. The arguments remained inconclusive and the court posted the matter for further hearing on October 9, when it will decide the issue of 'locus standi of Agrawal in the case.

The Centre had on September 29 informed the Supreme Court about its decision to drop the case against Quattrocchi, saying it could not be kept pending forever as two attempts to extradite him have already failed.

The move was later endorsed by Union Law Minister M Veerappa Moily, who said in London that the CBI will withdraw the case against Quattrocchi. However, Agrawal, in his plea, referred to a case of the 1984 anti-Sikh riots, in which a trial court rejected a closure report against former union minister Jagdish Tytler and directed the CBI to re-investigate his alleged role.

Agrawal had filed an appeal in the apex court against the Delhi High Court's decision to quash charges against all other accused in the case after the CBI failed to challenge it within the mandatory 90-day period.

Solicitor General Gopal Subramanium had told the apex court that the decision to close the case was taken after considering the February 4, 2004 judgment of the Delhi High Court, which held that no case of corruption was made out in the Bofors deal.

The high court had said that there was no evidence under the Prevention of Corruption Act and as such no appeal was filed against the decision. He had said that the CBI tried to get Quattrocchi extradited to India, following the Red Corner Notice issued against him, but failed in its efforts.

The CBI had failed on two occasions in its attempt to extradite Quattrocchi -- first from Malaysia in 2003 and then from Argentina in 2007. The Interpol has taken Quattrocchi's name off the Red Corner Notice following a communication from the CBI on the basis of the opinion of the then Attorney General Milon K Banerji, who was approached by the agency last year, for his view on the necessity to continue with the alert notice.

He had cited the inability of the CBI to seek Quattrocchi's extradition and opined that the judgments in both the cases indicated that there was no good ground for his extradition.

'There is nothing left to do in Quattrocchi case'