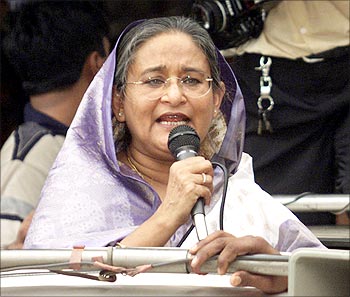 Bangladesh Prime Minister Sheikh Hasina has been chosen for the prestigious Indira Gandhi Prize for Peace, Disarmament and Development this year for her "outstanding contribution to the promotion of democracy and pluralism".

This was decided by an international jury chaired by Prime Minister Manmohan Singh on Thursday, the Indira Gandhi Memorial Trust said.

Hasina, 62, has been chosen for her "outstanding contribution to the promotion of democracy and pluralism, her determined drive to alleviate poverty and secure social and economic justice for her people through inclusive and sustainable development and her consistent commitment to peace", it said.

After her re-election in December last year, Hasina embarked on her 'Vision 2021', aimed at transforming Bangladesh into a middle-income country by 2021, by eliminating poverty and inequity, the trust said.

As the prime minister of Bangladesh from 1996 to 2001, she launched a number of programmes to meet the basic needs of the poor, through projects covering employment-generation, housing, health and food security, it said. The award, which carries a cash prize of Rs 25 lakh and a citation, will be presented to her at a function to be held at a later date.

Hasina "promoted peace by resolving a long-standing insurgency (problem) in Bangladesh by concluding the Chittagong Hill Tracts Peace Accord. Her global commitment to peace was manifested by her initiative that resulted in the adoption of the first-ever Resolution of the United Nations General Assembly on the Culture and Peace", the trust said.

'Our farmers are second to none'