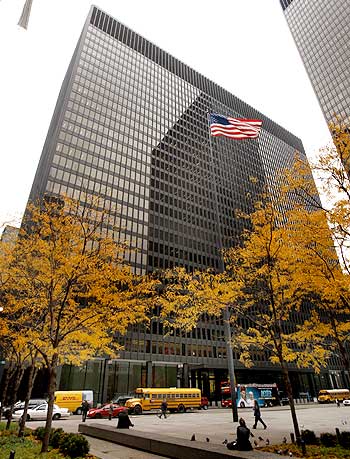 Giving a new dimension to the Lashkar-e-Tayiba plot to attack Indian facilities, Federal Bureau of Investigation's sleuths have recovered two inflammatory Al Qaeda videos, containing speeches by Osama bin Laden and other terrorists, from the house of Pakistan-born Canadian Tahawwur Hussain Rana, who was arrested in October.

Produced by 'As Sahab Media', commonly acknowledged to be the media wing of the Al Qaeda, one of the videos is titled 'Bombing of Denmark Embassy' and was recovered from the living room of Rana, 48, who has been staying in Chicago for nearly a decade.

Rana was arrested by the FBI last month along with David Coleman Headley, 49, for planning attacks on the National Defence College in Delhi, Doon school in Dehradun and Woodstock in Mussourie, besides some other facilities at the LeT's behest.

Indian investigators are in the US to question Headley, who had made several trips to Pakistan and was in constant touch with LeT leaders.

Federal prosecutors, in a supporting affidavit submitted to a Chicago court on Friday, informed judge Nan R Nolan about the videos. The video on Denmark, where a newspaper had published cartoons of Prophet Mohammad, is 54-minute long.

"That video was contained on a DVD recovered from the living room of defendant Rana's home on October 18, 2009," federal prosecutors said. "The video is narrated by Abu Yahya al-Libi, an Al Qaeda spokesman who reportedly escaped from American custody in Afghanistan."

"Mustafa Abu al-Yazid, the third ranking Al Qaeda member, also appears on the video," the new affidavit said. The video is focused principally on the controversy involving the controversial  cartoons, explicitly calling for violent action to retaliate against Denmark.

Early in the video, footage of then Danish Prime Minister Anders Fogh Rasmussen and cartoonist Kurt Westergaard, who defended the caricatures as freedom of expression, are featured prominently. This is followed by strong comments by the narrators, condemning the United States, Denmark and Jews.

According to the affidavit, the DVD also prominently features the video of the man who carried out a suicide car bombing of the Danish embassy in Islamabad on June 2, 2008. In addition to the Denmark video, federal prosecutors informed the court that a second DVD was also found in Rana's home.

"The video begins with a speech by Osama bin Laden, and profiles the lives and deaths of four men who were described as having died in the fight on behalf of Islam. The video also included remarks by Mustafa Abu al Yazid, who appeared on the Denmark video," the affidavit said in one of its footnotes.

As set forth in the complaint, the conspiracy Rana is charged with supporting began in Pakistan in late 2008.

In his post-arrest statement, Rana admitted, among other things, that he and Headley were upset about the cartoons published by the Danish newspaper. While discussing terrorist targets on September 7, 2009, Headley and Rana discussed one of them as 'Denmark', the affidavit said.

Rana on Friday submitted a fresh bail application before the court, in which he argued that an attack on a newspaper would not qualify as involving or promoting a crime of terrorism. Rana has proposed approximately $1 million in security for his release, including the home in which he and his family live in Chicago, and homes of several relatives and friends. Federal prosecutors argued that by definition alone Rana's acts meet the criteria of terrorism.

Rana was recorded discussing with his school-time friend and American national Headley an attack on the National Defence College in Delhi, "an attack directed at the conduct of the Indian government," said US Attorney Patrick J Fitzgerald. He urged the judge not to grant bail to Rana as this would increase the risk of him fleeing the country.

Responding to Rana's argument, the federal prosecutors said, "The circumstances of the plot to attack the 'Jyllands Posten' newspaper, or its cartoonist and editor, make clear that the conspirators and Rana viewed the Copenhagen attack as a response to a provocation by the country of Denmark."

In the fresh supporting affidavit in the court, Fitzgerald said it is clear that Rana, Headley and their co-conspirators understood that an attack on the Danish newspaper would likely involve a firefight with Danish troops.

"The surveillance videos taken by Headley in August 2009, and seized (from him)  prominently featured Danish troops stationed at barracks near the 'Jyllands-Posten' newspaper (office) as well as a detachment of Danish troops that marched past the newspaper office each afternoon en route to a 'changing of the guard'," said the affidavit which opposed Rana's bail plea, scheduled to be taken up by the court on November 10.

It said that any assault on the newspaper would no doubt have drawn a response from those troops as well as the Danish police.

"In a recorded conversation from August 2009, Headley advised an overseas conspirator that he had filmed the parade and the barracks where the soldiers lived and had engaged one of the officers in a conversation, and Headley verified that the soldiers' weapons were loaded with live ammunition," it said.

Headley had stated that he had discussed his conversation with the Danish soldier with Rana as well, the affidavit said. The US Attorney argued that Rana's participation in a discussion of one of the targets called 'Denmark' and his possession of propaganda video are compelling evidence that he viewed the contemplated attack as retaliation against the Danish government.

Have briefed India about arrested LeT operative: US

2 held in Pak for LeT's plot to attack India