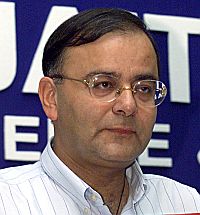 Arun Jaitley, leader of the opposition in the Rajya Sabha, was restrained in his reaction to the Ayodhya verdict delivered by the Allahabad high court's Lucknow bench; but his joy was hardly hidden.

Jaitley has been fighting the battle of nerves and words in the public space for the last 30 years over the issues of secularism, communalism, Babri mosque and the Ram temple.

He spoke to rediff.com's Sheela Bhatt in this exclusive interview.

On the disappointment of Muslims after the judgment

I don't think that's correct. First, nobody has read the entire judgment. The so-called liberals and secularists were reasonably certain that there would be a setback to the supporters of the Ram temple. So, all the media, lawyers, journalists, historians, archaeologists and commentators were singing the virtue of accepting the court verdict.

But by 4.15 pm on Thursday, the moment they saw that it's a step forward towards the construction of the temple, they ran down the judicial verdict.

I see it as constitutionalism of convenience.

I have not come across any significant Muslim reaction to the verdict in the country. Some hardliners may have said something, but I am sure the average Muslim wants this issue to be settled.

The court has provided the direction for temple construction and also on resolving the issue. The opposition to the judgment is not coming from the Muslims, but from those who regard secularism as a euphemism for majority-bashing.

Suddenly, they found that the judgment is suiting the majority and its aspirations, so they changed their position. Therefore, to say that there is heartburn in Muslims is not correct.

The Bharatiya Janata Party is not at all interested in exploiting the issue. This is a matter of faith, belief, religion, culture and heritage of billions and billions of people. The Ayodhya issue is far higher than politics.

On broad implications of the judgment

Of course, the high court's principal approach will have to be re-validated by the Supreme Court.

But on both grounds that they have arrived at the decision is the matter of evidence. There is a perception in Hindus that there was a Ram temple over there. The matter of faith can be whether Ram was born there or not.

But, whether that perception exists or not in Hindu society that Ram was born in Ayodhya, is a matter of fact, for which evidences were produced.

Accordingly, the issue was framed and the judgment was pronounced. Then, the matter was before the court what kind of structure existed before 1528.

This was an archaeological and historical issue and evidences were presented. While disposing the Sunni Waqf Board's suit and deposing the suit of the Ram deity, the judges came to the conclusion that the possession of Hindus was not exclusive because others were also using it.

So, that's how the court has come to the judgment of dividing the land in three parts. I am not sure if that's the correct approach. I haven't read the whole judgment. But, it's a possible approach the court has thought about.

On having a mosque and temple at the same site

There is a need to soothe the feelings of the majority by helping the construction of the Ram temple.