'Santhanam was worried about India signing the CTBT' 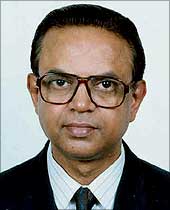 Scientist K Santhanam's statement terming the nuclear tests held under the aegis of the Bharatiya Janata Party-led National Democratic Alliance government at Pokhran, Rajasthan, in May 1998, a mere 'fizzle', has divided the country's scientific community.

While some nuclear scientists have supported Santhanam, who was in charge of Pokhran-II, others feel such a statement was uncalled for.

In an interview with rediff.com's Vicky Nanjappa, Dr A N Prasad, former director of the Bhabha Atomic Research Centre and a distinguished nuclear scientist, explains the reasons behind Santhanam's statement and its possible implications for India.

What prompted Mr Santhanam to issue such a statement about Pokhran II?

I feel he made such a statement because of his concerns about the latest moves by the United States to pressurise India to sign the Comprehensive Test Ban Treaty. I feel his statements are aimed at ensuring that India rethinks its stand on this issue.

India has already accepted the terms and conditions of the India-US civil nuclear agreement. Though the official position is that we can conduct tests, in practice we are not allowed to do so.

Once the process is complete, we will invest billions of dollars and if under any circumstance if we go ahead and conduct a test due to our national interests, the economic consequences will be bad.

In case we go ahead and conduct tests, then the deal will surely be off and all the efforts towards building reactors and infrastructure will be a waste. Probably Santhanam thought this was not the right time to sign the CTBT and hence he came out with such a statement.

For all practical purposes, we are in a situation where the CTBT has become a mere formality, as we have voluntarily announced a moratorium on testing. As I said earlier, in the future, in case India goes ahead and conducts a test, the economic consequences would be terrible.

I think India should carefully study all these factors before going ahead.

Who do you think should shoulder the blame for the 'fizzle', as Mr Santhanam called the 1998 tests?

It is unfair to blame one single political party for this. Blaming the BJP is not right. Every politician who is at the helm of affairs is bound to go by the version of the experts and the BJP too did the same.

If the people who were in charge of conducting the tests say that the tests were good enough, then political parties have no option but to go by their statements.

Do you think Mr Santhanam is right?

I really can't say. It is difficult to detonate a thermo-nuclear device underground. Hence to say that everything is 100 per cent correct where Pokhran II is concerned raises a doubt. We need to look into the issue in a proper perspective and then come to a conclusion.

I personally don't know the exact results of the test. Insiders like Santhanam and P K Iyengar, who were actively involved in Pokhran-II, will know best. I must add that blaming politicians is not the answer here.

But the statement has come after 11 years. It raises doubts about the timing; it seems the issue has been scripted.

I know people are repeatedly asking why this statement was made after 11 years. Try and understand that it is very difficult to make a statement when a person is in the government. The official version is different.

A correct statement can be made only after the person retires and this could have been the case for Santhanam too. Probably he is worried about (India signing) the CTBT.

After the embarrassing revelations, how will India tackle the situation?

Let us not forget that it is a highly credible thing to carry out a nuclear test in the first place. Just because such a statement has been made, let us not take away the contribution of the scientists.

It is not a crime to fail.

Nothing can be 100 per cent perfect. However, covering up something that has not gone entirely correctly is wrong.

What about the CTBT? What does India do now?

Some damage control exercise is needed here. There is a problem on hand and it needs to be set right. There is a lot of chaos and confusion at this moment. At such a time, it would not be sensible to go ahead and sign the CTBT.

We need to wait for things to cool down first. There is no great hurry either since the US too has not ratified it. Unless they ratify it there is no big hurry.