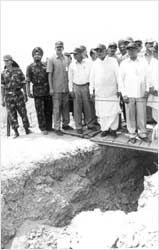 The defence ministry on Thursday rejected senior Defence Research and Development Organisation scientist K Santhanam's assertion that the 1998 Pokhran II nuclear tests were not fully successful, adding that India has a meaningful number of nuclear weapons and an effective delivery system to go with it.

Sources in the ministry told Times Now television channel that India has a nuclear deterrent that is adequate for its security.

K Santhanam, who was director for 1998 test site preparations, had said in an interview that the yield of thermonuclear explosions was actually much below expectations and the tests were perhaps more a fizzle rather than a big bang.  In nuclear parlance, a test is described as a fizzle when it fails to meet the desired yield.

Santhanam said the yield for the thermonuclear test, or hydrogen bomb in popular usage, was much lower than what was claimed. Santhanam also said that given this fact, India should not rush into signing the Comprehensive Test Ban Treaty.

He emphasised the need for India to conduct more tests to improve its nuclear weapon programme. The test was said to have yielded 45 kilotons (KT) but was challenged by Western experts who said it was not more than 20 KT.

The exact yield of the thermonuclear explosion is important as during the heated debate on the India-US nuclear deal, it was strenuously argued by the government's top scientists that no more tests were required for the country's nuclear weapons programme.

It was said the disincentives the nuclear deal imposed on testing would not really matter as further tests were not required.

According to security expert Bharat Karnad, Santhanam's admission is remarkable because this was the first time a nuclear scientist, one closely associated with the 1998 tests at that, has disavowed the government line.

"This means the government has to do something. Either you don't have a thermonuclear deterrent or prove that you have it, if you claim to have it," said Karnad.

The yield of the thermonuclear device test in 1998 has led to much debate and while Western experts have stated that it was not as claimed, the Bhabha Atomic Research Centre has maintained that it stands by its assessment.

Indian scientists had claimed after the test that the thermonuclear device gave a total yield of 45 KT, 15 KT from the fission trigger and 30 KT from the fusion process and that the theoretical yield of the device (200 KT) was reduced to 45 KT in order to minimise seismic damage to villages near the test range.

British experts, however, later challenged the claims saying that the actual combined yield for the fission device and thermonuclear bomb was not more than 20 KT.

Sources claim that Santhanam had admitted that the test was a fizzle during a discussion on CTBT organized by the IDSA.

India conducted five nuclear tests at the Pokhran test range in 1998. Three of them were conducted on May 11 and two on May 13.  R Chidambaram headed the team which conducted the tests, and the device was developed at the DRDO's Ballistics Research Laboratory.