If Husain feels betrayed, so does India 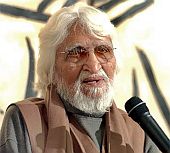 If Husain feels betrayed by the treatment being meted out to him in the country of his birth, India too has reasons to feel betrayed by its globally-celebrated son, writes Mahendra Ved.

Maqbool Fida Husain, India's best-known painter, feels betrayed by the land of his birth to the extent that last month, he all but renounced its citizenship and take one of Qatar.

The citizenship was conferred upon Husain by the First Lady, Sheikha Mozah bin Nasser al Misned, wife of Qatar ruler Sheikh Hamad bin Khalifa al Thani, after commissioning him to work on a series of sculptures.

His choice of Qatar, a Sheikhdom in the Gulf, a region known for repression of personal and religious freedom, especially of the non-Muslims, has been widely criticised.

Qatar's Constitution, as well as certain laws, provide for freedom of association, public assembly, and worship in accordance with the requirements of public order and morality.

However, the law prohibits proselytising by non-Muslims and places some restrictions on public worship. The state religion is Islam. While most Qataris are Sunni, Shi'a Muslims freely practice their faith.

This may be on paper, different in practice. As India's then Deputy Prime Minister, L K Advani, on a visit in 2003, had pleaded that the large Hindu work force be allowed to build temples. Such is the case in, say, Bahrain.

The ruler, Sheikh Hamad bin Khalifa al Thani, reacting positively, said he was working to create conditions that would allow temples and churches. This will obviously take time.

The 1952 born ruler, who deposed his orthodox father 15 years ago, has in the last decade changed Qatar's face considerably. It is fast becoming the Singapore of the Middle East. Within a decade or so, he created the Al-Jazeera media network, Qatar Airways, hosted the BBC Doha Debate, has an entire satellite township with the finest universities virtually run by top American universities and is promoting arts.

Under him, Qatar today is leading a relatively liberal block in the Gulf region with a Parliament that has women members and the government, a woman minister. Politically, it is a US ally and has Israel's Economic Section functioning in Doha.

Given these conditions and royal patronage, it is, perhaps, natural for Husain to accept the citizenship.

Husain's paintings created in the 1970s were reproduced three decades later in 2006 by a magazine, which asked if he was 'a painter or a butcher'. Once the controversy started, his exhibitions were vandalised and threats were issued. Court cases, which Husain estimates at 900, have been slapped against him.

Husain has been on the run ever since.

He has lived in Dubai, spends his summers in London and works on a punishing schedule for his age, conducting a project in Doha, Qatar. While Husain has stated that he has been 'honoured' by Qatar nationality, it is not clear whether it is an honorary citizenship and whether he is giving up Indian citizenship.

India does not allow dual citizenship even though there is an overseas Indian category.

He has been conferred citizenship, not sought it. If he has sought and received it, he loses Indian citizenship. He could retain it only if it is an honorary citizenship. But available indications are that it is a serious, formal offer and he has to make a choice. He will have to take a decision whether to accept the Qatari offer. Once he does, he ceases to be Indian citizen. His relatives have been quoted that he might be taking up the offer.

The Citizenship Act of 1955 makes it clear that the termination of Indian citizenship can be done in two ways: renunciation or acquisition of citizenship of another country. The acquisition, the law requires, has to be voluntarily.

If Husain feels betrayed by the treatment being meted out to him in the country of his birth, India too has reasons to feel betrayed by its globally-celebrated son.

He has chosen this path at the fag end of a very long and illustrious life, after living for nine decades, savouring what he calls 'the exuberant Indian culture'. Running away from the law of the land is one way of looking at the recent developments.

The other way, equally legitimate and fair, is playing safe in the ripe old age, to avoid legal hassles and visits to courts, possible attacks on self or artworks and avoid unsavoury situations.

Much as it celebrates its freedom and its democratic traditions, the fact is that India's record, when it comes to allowing artistic freedom, is heavily blemished. However, the basic question remains whether Indians, particularly the government of India and the large political class of India, should permit such a thing that would challenge their claims of inclusive culture.

It is not enough for Foreign Secretary Nirupama Rao to say, "I would like him to feel safe and secure in India" and that "he is the pride of India".

Granting that the government cannot have 900 cases against him withdrawn, it must still make a positive gesture to support the initiative already taken by artists and the liberal sections of the society.

The real task is for India's political class. Congress spokesman Satyavrat Chaturvedi has described Husain's decision as 'personal'. Personal it is, but one would like the party to take the initiative to build an opinion conducive to his return -- and return to safety and well being that would facilitate his creative pursuits.

Mahendra Ved is a Delhi-based writer and columnist.