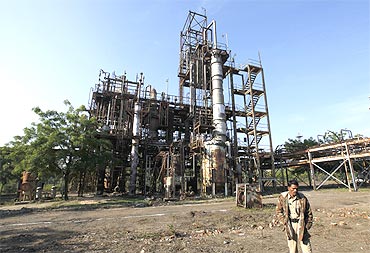 A quarter century after the world's worst industrial disaster killed over 15,000 people, a Bhopal court on Monday convicted former Union Carbide India Chairman Keshub Mahindra and seven others in the Bhopal gas tragedy case and awarded them a maximum of two years imprisonment.

However, 89-year-old Warren Anderson, the then chairman of Union Carbide Corporation of USA, who lives in the United States, appeared to have gone scot-free as he is still an absconder and did not subject himself to the trial.

There was no word about him in the judgment delivered by Chief Judicial Magistrate Mohan P Tiwari 23 years after the trial commenced.

All the convicts applied for bail immediately after the sentencing and were granted relief in the case, the judgment of which comes against the backdrop of a debate on the Civil Nuclear Liability bill, which would provide for compensation to victims in case of a nuclear disaster. 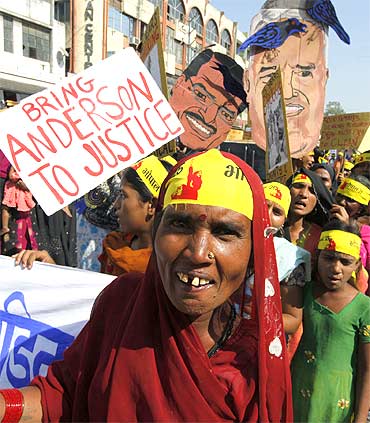 Tiwari pronounced the verdict in a packed court room, convicting 85-year-old Mahindra, the non-executive former chairman of UCIL, and seven others in the case relating to the leakage of deadly methyl isocyanate gas in the night intervening December 2 and December 3 in 1984. They were held guilty under Sections 304-A (causing death by negligence), 304-II (culpable homicide not amounting to murder) and 336, 337 and 338 (gross negligence) of the Indian Penal Code.

Incidentally, Mahindra had declined a Padma Bhushan award in 2002 on grounds that he was facing trial in the case. He, along with six other accused, was present to hear the judgment while Quereshi was represented by his counsel. The sentencing for Quereshi is yet to be announced. 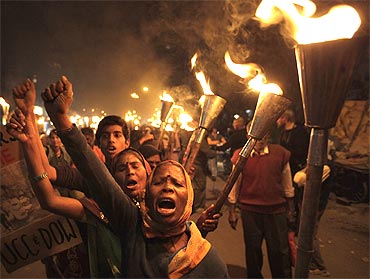 Civil rights activists fighting for the families of victims of the disaster called the judgment 'too little, too late' and accused the prosecution and the Central Bureau of Investigation of failing the victims by diluting the charges.

A total of 178 prosecution witnesses were examined in the trial and 3008 documents were produced while eight defence witnesses deposed in the court. 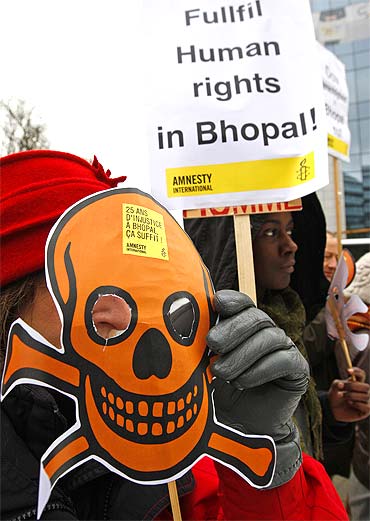 The FIR in the tragedy was filed on December 3, 1984 and the case was transferred to the Central Bureau of Investigation on December 6, 1984.

The CBI filed the charge-sheet after investigations on December 1, 1987. Subsequently, a local court had framed charges against the accused. 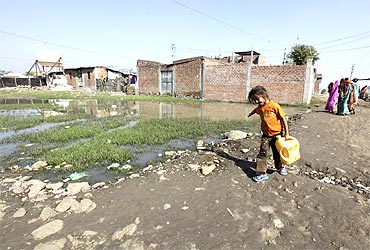 Image: A girl carries water in a slum area next to the Union Carbide Corp pesticide plant in Bhopal
Photographs: Reinhard Krause/Reuters

CBI counsel C Sahay had argued that the defective design of UCIL and its poor maintenance resulted in the tragedy that had left 2,259 dead immediately after the mishap. The lingering effects of the highly poisonous methyl isocyanate killed over 15,000 people.