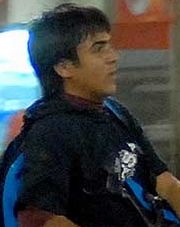 Pakistani terrorist Ajmal Amir Kasab, the lone surviving 26/11 gunman, was convicted by a special court in Mumbai on Monday for the audacious Mumbai attacks that had left 166 people dead.

Over 17 months after he and nine other perpetrators unleashed death and devastation on the financial nerve centre of the country, special anti-terror court judge M L Tahaliyani convicted Kasab for the carnage.

Kasab, who hails from Faridkot in Pakistan, now faces the prospect of death penalty.

Two alleged Indian conspirators -- Sabauddin Ahmed and Faheem Ansari -- who were claimed to have prepared the maps of the terror targets and handed those over to Pakistan-based Lashkar-e-Tayiba for execution of their plans, were acquitted of all charges as the court said the evidence produced by the prosecution could not be relied upon.

The court also held that 20 of the wanted accused, including Lashkar-e-Tayiba founder Hafiz Saeed, operations chief Zaki-ur-Rehman Lakhvi and Abu Hamza, were involved in 26/11 conspiracy.

The court will hear tomorrow arguments by the defence and prosecution on the quantum of sentence for 22-year-old Kasab, who was captured alive from the Girgaum-Chowpatty police barricade following an encounter after he and his accomplice

Abu Ismael had killed several people at Chhatrapati Shivaji Terminus, in and outside Cama Hospital and Metro Junction.

Pronouncing the verdict, judge Tahaliyani told Kasab in Hindi that the charge against him for waging war against India was found to be true.

While holding the terrorist personally accountable for killing innocent people at Chhatrapati Shivaji Terminus and Cama Hospital, the court also pronounced Kasab guilty of abetting murder at other scenes of the attacks where his accomplices perpetrated mass killing.

All the 10 terrorists were found to be carrying fake identity cards, but the judge said it was not proved beyond reasonable doubt that Kasab had himself forged the document.

Ten terrorists, trained and armed by the outlawed LeT in Pakistan, had descended on Mumbai on a 'Fidayeen' (suicide) mission on November 26, 2008 and wreaked havoc during the 60-hour siege, killing and wounding people at will.

Kasab, along with nine slain terrorists, was charged with killing 166 people, including 25 foreigners, and injuring 304 others at the instance of the LeT.

The trial, perhaps the fastest in a terror case in India, had commenced on May 8 in a special court set up at Arthur Road Jail which recorded 3,192 pages of evidence after examining 658 witnesses on 271 working days.

Thirty witnesses had identified in court Kasab as the man who had opened fire at them.

Stating that 26/11 attack was not a simple act of murde, Tahaliyani said, "It was part of a larger conspiracy to wage war against the nation."

The judge observed that terrorists' handlers from Pakistan were directing them, asking them to "fight until death" and not allow themselves to be caught alive.

The court found that 20 of the 35 absconding accused named in the chargesheet, including Saeed and Lakhvi were involved in the conspiracy. The court had issued non-bailable warrants against 27 of them during the trial which were handed over to the Interpol, but none was arrested.

The acquittal of the two Indians -- Ansari and Ahmed -- came as a jolt for the prosecution.

The prosecution had claimed that Ansari had prepared maps of terror targets and handed it over to Sabauddin Ahmed in Nepal. Ahmed allegedly forwarded those to LeT.

To buttress its point, the prosecution had relied upon the evidence of one Nooruddin, who claimed he was present when Ansari handed over the maps to Sabauddin. One of the maps, according to prosecution, was found from the possession of Abu Ismael, Kasab's accomplice killed at Girgaum-Chowpatty area.

The judge said there was no confirmation about Nooruddin going to Nepal and accepted the defence's contention that if the map tabled by prosecution was indeed found on Ismael, it would have been soiled and stained with blood which it was not.

The prosecution, led by Ujjwal Nikam, submitted 1,015 articles seized during investigations and filed 1,691 documents to support its case. The prosecution also sought to prove that Pakistan's security apparatus was used by the LeT in the attacks.

For the first time in the Indian legal history, the Federal Bureau of Investigation officials deposed to give technical evidence to prove the case of the prosecution that the killers came from Pakistan using the global positioning system and that they made calls from their mobile phones through voice over internet protocol to stay in touch with the conspirators.

Kasab, dressed in a white kurta-pyjama, stood silently when the charges were read out to him. He stared blankly at the ground when pronounced guilty.

While acquitting Ansari and Ahmed, the judge said the Pakistani handlers of the terrorists would not have gone for hand-drawn maps, which were more 'confusing than helpful'.

"The main perpetrators have used latest techniques like Google Earth, Voice Over Internet Protocol and GPS systems to prepare for the attack," Tahaliyani said.

Talking to reporters, Public Prosecutor Nikam said he would appeal against the acquittal of the two Indian accused in a higher court. He claimed that the prosecution had been able to present a 'water-tight case' against all three accused and hoped that the circumstances -- which the trial court had not found sufficient for the conviction of Ansari and Ahmed -- would nail them in the appellate court.

According to the prosecution, Kasab and his accomplices were given commando and intelligence training at a camp in Muridke in Pakistan by LeT chief Hafeez Saeed and chief of operations Zaki-ur-Rehman Lakhvi.

The prosecution had, in its over 10,000-page chargesheet, named 35 persons from Pakistan as wanted accused in the case. Apart from LeT founder Saeed and Lakhvi, the 20 wanted accused, who have been held responsible for their involvement in the attack, include other LeT operatives like Abu Hamza, Abu Kaahfa, Zarar Shah and Abu Al Kama.

It also includes one Major General Saab, who according to the prosecution, is a retired general of the Pakistan army and was present during the training of the 10 terrorists who had attacked Mumbai.

"The 20 wanted accused were involved in hatching the conspiracy and preparations and training of the ten terrorists," the court said.