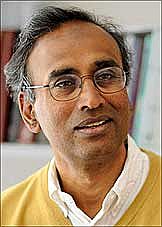 Nobel laureate Venkatraman Ramakrishnan has expressed disenchantment with people from India 'bothering' him 'clogging' up his email box and dubbed as 'strange' their sudden urge to reach out to him.

"All sorts of people from India have been writing to me, clogging up my email box. It takes me an hour or two to just remove their mails," he said.

He said the deluge of emails had buried important communications from colleagues or from journals concerning papers we have in press. "Do these people have no consideration? It is OK to take pride in the event, but why bother me?" the 57-year-old Indian-American scientist wondered in an email interview to PTI.

"There are also people who have never bothered to be in touch with me for decades who suddenly feel the urge to connect. I find this strange," said Ramakrishnan, who shared this year's Nobel Prize for Chemistry with two others.

He expressed anguish over 'all sorts of lies' published about him in a section of the media that he went to school and pre-Science in Chidambaram, the Tamil Nadu temple town where he was born in 1952.

"People I don't know, for example a Mr Govindrajan, claim that they were my teachers at Annamalai University which I never attended, since I left Chidambaram at the age of three," Ramakrishnan clarified.