News
Business
Movies
Sports
Cricket
Get Ahead
Money Tips
Shopping
Sign in  |  Create a Rediffmail account
Rediff.com  » News » Jaswant's views on Jinnah are his own, not BJP's: Rajnath 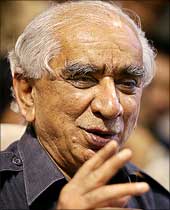 The Bharatiya Janata Party on Monday dissociated itself from the book written by its senior leader Jaswant Singh praising Mohammad Ali Jinnah, saying the 'painful' part of history cannot be wished away for which the Pakistan founder was responsible.

"Views expressed by Jaswant Singh in his book Jinnah -- India, Partition, Independence does not represent views of the party. In fact, the party completely dissociates itself from the contents of the book," party chief Rajnath Singh told media persons in New Delhi.

In his book, Jaswant held Jawaharlal Nehru responsible for the partition of India and said that Jinnah had been "demonised" in India.

Rajnath Singh underlined that Jinnah had played an important role in 'division of India, which led to dislocation and destabilisation of millions of people'.

"It is too well known we cannot wish away this painful part of our history," he said.

He also took objection to ridiculing of Sardar Vallabhai Patel by Jaswant Singh, saying the first Home minister played a historic role in unification and consolidation of India amidst serious threats to its unity and integrity.

"The entire country remains indebted and proud of all the profound vision, courage and leadership of Patel," he said.