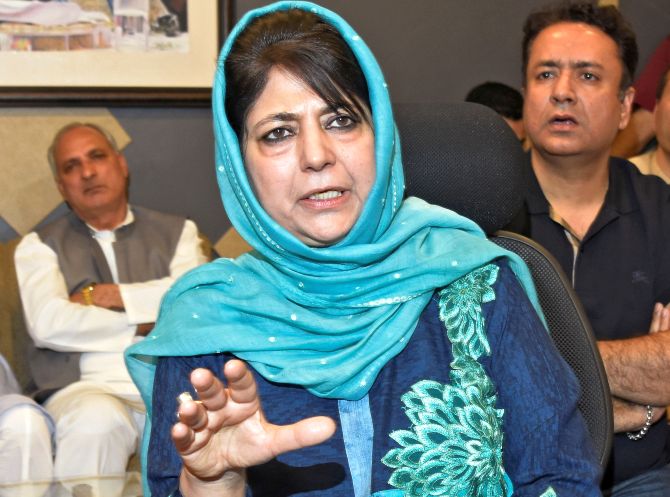 Peoples Democratic Party president Mehbooba Mufti said choking the democratic space and punishing people collectively was a new policy adopted by the Centre to deal with Kashmir.
The purpose behind the "repressive measures being taken in Jammu and Kashmir by the BJP-led government is to show the electorate how tough the saffron party is against Kashmiris", Mufti claimed.
"Choking democratic space and punishing people collectively is unfortunately a new policy adopted by the government of India to deal with Kashmir," the former chief minister said at a PDP youth convention in Srinagar,.
Referring to a ban imposed on the JKLF and the Jamaat-e-Islami Jammu and Kashmir, she said it was ironical that while on one hand, the central government claims to have launched a rehabilitation scheme for militants who lay down arms, on the other, organisations like Jammat and JKLF, which have rejected violence as a method of achieving any goal, are slapped with bans.
"The JKLF is committed to resolution through political means, while the Jamaat-e-Islami is a religious and social organisation running schools and orphanages across the state. Such repressive measures will shrink the already limited space and will only increase the level of alienation and frustration among the people," Mufti said.
The PDP chief termed the upcoming elections crucial for determining the future of the state. -- PTI
« Back to LIVE