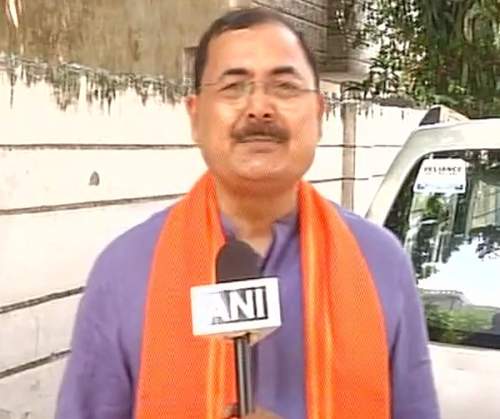 The BJP Monday expelled one of its senior Lucknow-based leaders after he dubbed the party's top leadership as "Gujarati thugs" and asked if the BJP has chosen a 'pradhan mantri' (prime minister) or a prachar mantri (advertisement minister).
While attacking the BJP's top leadership in a series of tweets, the party's former spokesperson I P Singh also hailed Samajwadi Party chief Akhilesh Yadav's candidature from Azamgarh and offered him his residence for use as his poll campaign office.
"I P Singh has been expelled from the party for six years on directions of the BJP state president," said a party release in Lucknow. The expulsion followed after Singh attacked the BJP leadership in a series of tweets from his official Twitter account having a prefix "usuldaar" (principled) to his name.
"I belong to a principled 'kshatriya' family. Two Gujarati thugs have been befooling Hindi-speaking people for the last five years after capturing the country's Hindi heartland, while we are silent," he said in one of his tweets Friday.
"Our UP is six times bigger than Gujarat with an economy of Rs five lakh crore against Gujarat's Rs one lakh 15 thousand crore," said Singh, adding, in such a situation what would they eat and what development would they cause.
In another tweet, he said, "Have we elected a 'pradhan mantri' or 'prachar mantri'? Does the country's prime minister look good selling t-shirt and tea cup?"
"The BJP has been a party which made its place in the people's hearts through its ideology. It's impossible to 'produce' workers with missed calls and T-shirts," he added.
An Azamgarh native, Singh had on Sunday also welcomed Akhilesh Yadav's candidature from there and offered his house to be used as his election office. "The people of eastern UP are overjoyed and the youths here are excited after the announcement of Akhilesh Yadav's candidature from Poorvanchal. It heralds an end of the politics of caste and religion," said Singh.
« Back to LIVE