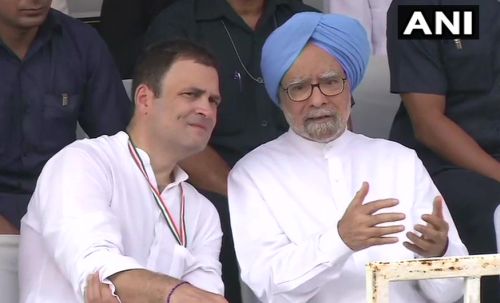 If you've just joined us, here's an update of the big story today.


Leaders of various opposition parties led by Congress president Rahul Gandhi kick-started Monday with the country-wide protest against rising fuel prices from Rajghat. Gandhi, soon after his return from the Kailash Mansarovar, reached Rajghat and paid his tributes to Mahatma Gandhi. The Bharat bandh began after Gandhi offered holy water from the pilgrimage there.


Azad said people across the country were joining hands to protest againt the rising prices of petrol and diesel. "In Delhi too we are getting together under one platform and are starting our protest from Rajghat," he said.


Twenty-one opposition parties are supporting the Bharat bandh, besides a number of chambers of commerce and traders' associations. The party has demanded that petrol and diesel should be brought under the GST, by which oil prices could drop by about Rs 15 to Rs 18. Petrol and diesel prices set new records Sunday.