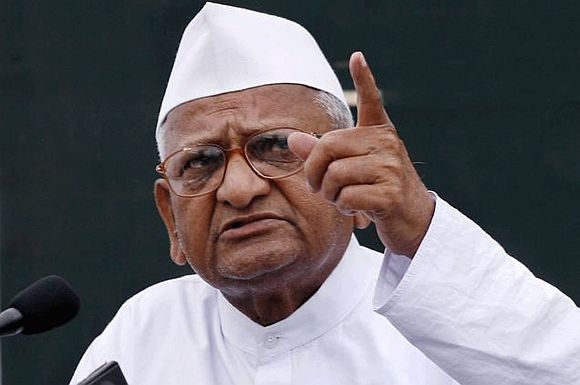 Social activist Anna Hazare will sit on a hunger strike Ralegan Siddhi from October 2 over issues like appointment of Lokpal and welfare measures for the agrarian sector, including Rs 5,000 monthly pension for farmers.
According to a statement in Ralegan Siddhi on Monday, Hazare also sought implementation of the Swaminathan Commission recommendations to alleviate the plight of farmers, who have been facing serious economic crisis for the last few years.
The government has not acted on these demands despite repeated requests, it said. Hazare has also sought that each farmer in the country get Rs 5,000 pension per month, an aide of the social activist said.
The 80-year-old anti-graft activist will launch the protest at his native village, on the birth anniversary of Mahatma Gandhi.
Hazare sat on a hunger strike in Delhi in March this year raising the demands, but had called it off after assurance from the government that necessary steps would be taken in this regard.
He had then warned the government about launching the agitation again within six months if his demands go unattended.
"The demand of appointments of Lokpal and Lokayukta for ensuring speedy justice to people combating corruption and assuring transparency in governance and another demand for implementing the (Swaminathan) Commission report have not been fulfilled despite repeated requests to the government," the statement said.
"As a result, Hazare is firm on launching his protest in Ralegan Siddhi," it said.
After the activist's protest at Delhi's Ramlila Maidan in March, Maharashtra Chief Minister Devendra Fadnavis had acted as an emissary of the Centre and had said that the National Democratic Alliance government had taken 'positive decisions' in response to the demands.
The Swaminathan Commission was formed in 2004 to identify and suggest solutions to problems farmers in the country face.
It submitted five reports between December 2004 and October 2006, suggesting various steps to improve the agrarian situation.
Hazare, who has been the face of the Lokpal movement, had first gone on a 12-day hunger strike in 2011 over the Lokpal issue.  -- PTI
« Back to LIVE