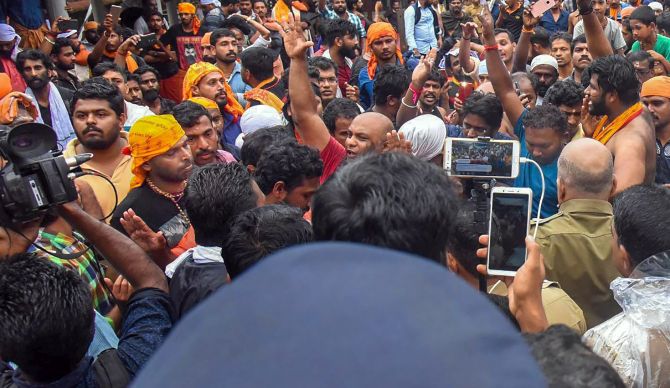 The Kerala police has released photographs of over 200 people suspected to have been involved in the protests at Sabarimala to prevent the entry of women of menstrual age into the Lord Ayyappa shrine last week.


Special teams would be formed in all districts to identify the suspects whose photographs were released on Wednesday, police sources said.


Pathnamthitta district police chief T Narayanan said a list of 210 people, suspected to have taken part in the protests and their photographs have been been sent to Superintendents of Police of various districts for identification.


Meanwhile, as part of steps to beef up security at the 'Sannidhanam' (temple complex), it has been decided to deploy 5,000 additional police personnel during the three month-long 'mandalam-makaravillaku' season starting on November 17.


The number of police personnel at Sannidhanam, Pamba and Nilakkal would also be increased and more CCTV cameras would be installed, a police press note said.


The temple had witnessed high drama recently with around a dozen women in the 10-50 age group being prevented by protesting devotees from entering it after the doors were opened for all women following the apex court verdict. -- PTI