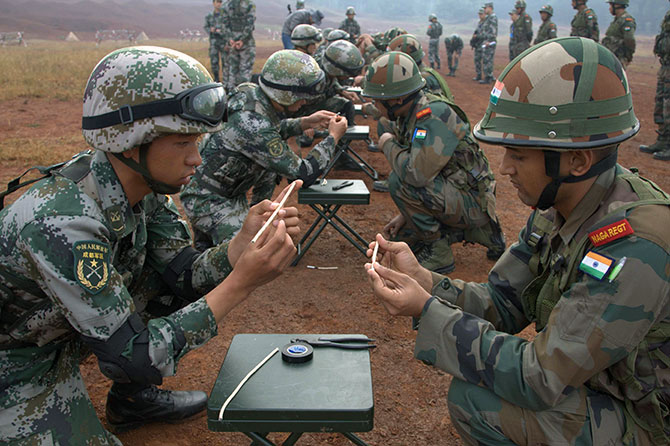 China and India would hold joint military drills later this year and officials from the two sides will soon meet in Chinese city Chengdu to finalise the plans to resume the exercises, the defence ministry said.
The 7th India and China joint military exercises will be held in China this year, Defence Ministry spokesman Col Wu Qian told a media briefing.
"The two sides agreed to hold the planning conference in Chengdu to further discuss on details of the joint exercises," he said.
The exercises - 'Hand-in-Hand' - focussing on counter-terrorism operations were not held last year as both sides were locked in a 73-day standoff in Doklam in the Sikkim sector of the border.
The strained relations between the two sides later improved resulting in an informal summit between Prime Minister Narendra Modi and Chinese President Xi Jinping in Chinese city of Wuhan.
Since then the bilateral military ties have also improved.
Chinese Defence Minister General Wei Fenghe visited India in August and met Prime Minister Modi and held talks with his Indian counterpart Nirmala Sitharaman.
The two ministers talked about setting up a hotline between adjacent military commands and improve the role of defence and security consultations mechanism and the meeting mechanism between the working delegations of the defence ministries, the Chinese military said earlier.
India and China have held so far 20 rounds of Special Representatives talks to resolve their border dispute.
« Back to LIVE