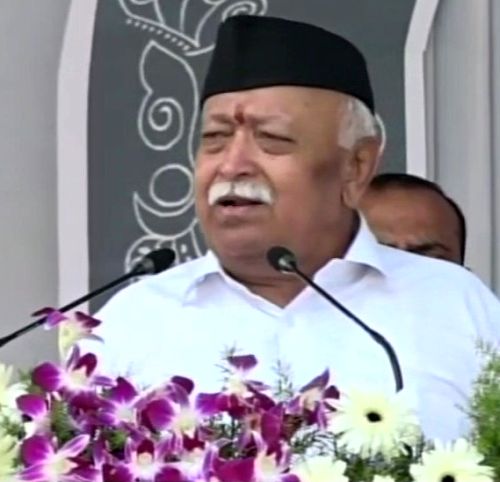 Demanding a law for construction of a Ram temple in Ayodhya, Rashtriya Swayamsevak Sangh chief Mohan Bhagwat on Thursday said that the construction of a temple is necessary from self-esteem point of view.
"Temple construction is necessary from self-esteem point of view. It will also pave way for an atmosphere of goodwill and oneness," he said in his annual Vijayadashmi address at the RSS headquarters at Reshimbagh in Nagpur.
Bhagwat said Maoism has always been "urban" and the neo-Left doctrine of urban Naxals is to establish an "anti-national" leadership with blind followers solely committed to them.
He charged that "urban Maoism" was propagating falsehood and spreading hatred in the society.
Maoism has always been urban which used neglected sections of society to further its agenda, he said.
"These people (Maoists) take strength from the country's enemies and always malign the nation wherever they go," he charged.
To establish an anti-national leadership with blind followers solely committed to them is the 'neo-Left' doctrine of these urban Naxals, he said.
Their cohorts already established in social media, intellectual circles and other institutions are associated with such activities, he added.
Through the manufacturing of a vicious atmosphere that weakens the social cohesion - essentially the bedrock of internal security of a nation  a world of psychological warfare is being carved out, he charged.
"This is called as 'Mantrayuddh' in our traditional 'rajneeti shastras'," he said.
Bhagwat said the government and the administration need to address this.
A number of well-known activists in the country were arrested in the recent past for their alleged links with naxals
« Back to LIVE