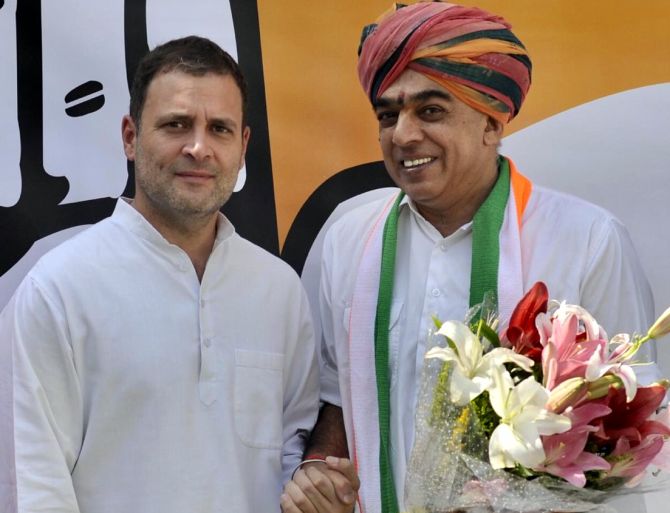 People of Rajasthan will take revenge from the BJP for insulting Rajput leader and former Union minister Jaswant Singh in the December 7 assembly election, his son Manvendra Singh said on Thursday.
Singh, who joined the Congress on Wednesday, exuded confidence in the leadership of Rahul Gandhi saying it is important for the country's leader to have humanity, which the Congress chief has in abundance.
"It was not easy for me to quit the BJP as it was my family. But, when I was not heard within the family and a friend (Rahul) heard me, it was then that I took the step...
"The people of Rajasthan, especially from Barmer, Jalaur, Jaisalmer and Jodhpur will take revenge for that insult caused to my father Jaswant Singh when he was denied the party ticket and was expelled," he said.
BJP veteran Jaswant Singh was denied the party ticket in 2014 Lok Sabha elections but he contested as an Independent from Barmer and lost. He was later expelled from the BJP for contesting the election against the party's official candidate.
"After Atal ji left, values in the BJP have also gone and that old traditional values are no longer there in the BJP. I feel, the decision taken by me has Atal ji's blessings," he said.
-- PTI
« Back to LIVE