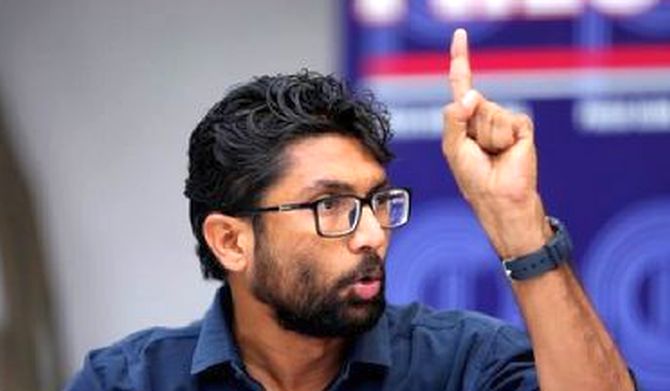 Gujarat MLA Jignesh Mewani today said Dalits would take a pledge to not vote for the Bharatiya Janata Party in upcoming Rajasthan elections under a campaign which will be later extended to Maharashtra.
Addressing a gathering in Nagpur, the first-time MLA and Dalit leader said the saffron party would 'long' for Dalit votes in all upcoming polls but would never get them.
"We will ensure that Dalit votes don't go to the BJP. We will make Dalits take a pledge not to vote for the BJP. At least, one lakh Dalits will take the oath in name of B R Ambedkar. This campaign will also be conducted in all districts of Maharashtra," he said while addressing 'Manavadhikar Parishad' (Human rights conference) organised by the Republican Youth Federation.
BJP-ruled Rajasthan is going to polls later this year.
Attacking the BJP, Mewani said the saffron party is anti-Constitution, fascist, and believes in 'Manusmriti' (an ancient book of Hindu law which liberals dub as casteist).
Mewani also criticised Prime Minister Narendra Modi, terming him the 'biggest liar' of Century.
"Prime Minister Narendra Modi is the biggest liar of the century. He had promised creation of 2 crore jobs every year before coming to power. However, even after completing four years in office, not even 8 lakh jobs were created," he said.
In a dig, Mewani said, "...At least give jobs to unemployed workers of ABVP (Akhil Bhartiya Vidyarthi Parishad), Rashtriya Swayamsevak Sangh, and BJP".
"If the prime minister really wants to work for people he can create 25 lakh jobs in government sector overnight. At least 15 lakh teachers can be appointed in primary and higher primary schools in the country and two lakh more people can be appointed in railways. Similarly, if Modi wants five lakh doctors can be appointed in primary health centres, district hospitals and community health centres in the country," he said.
However, instead of creating jobs in government, Modi will sell Air India, the legislator said.
Replying a query on former President Pranab Mukherjee accepting an invitation to attend an RSS event here next month, Mewani said, "I think he should bring a lock and lock the RSS here".  -- PTI
« Back to LIVE