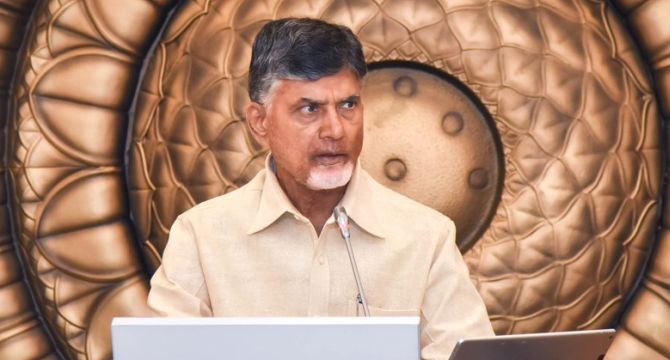 'I'm writing this letter after the Telugu Desam Party's decision to quit the NDA family. This decision is both unfortunate as well as unilateral. It is a decision; I am afraid, will be construed as being guided wholly and solely by political considerations instead of developmental concerns,' Shah wrote.

'Andhra Pradesh figures very prominently on our agenda of national development and it is widely known that the Union government led by the Hon'ble Prime Minister Shri Narendra Modi has left no stone unturned in ensuring the growth and prosperity of Andhra Pradesh.

'You may recall that during the previous Lok Sabha and in the Rajya Sabha, when your party did not have adequate representation, it was the BJP that set the agenda and ensured that justice is done to the hardworking Telugu people in both the states,' Shah wrote to Naidu.

'Since the discussion of bifurcating united Andhra Pradesh till the present, it is the BJP that has led the voice of safeguarding the welfare of Telugu people in both the Telugu states.

'This is in direct contrast to the Congress party, which not only mismanaged the bifurcation but also showed zero sensitivity towards the Telugu people, which is in line with their historic apathy to the Telugu community,' he wrote.  -- ANI
« Back to LIVE
Business emailOffice email AppDomain registrationWebsiteRediffmailMoneyCompany emailOnline ShoppingBooksGiftsVideosBlogsBuzz