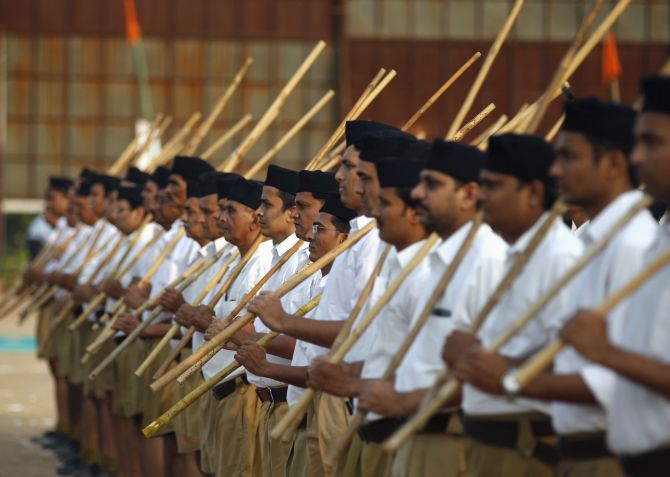 The RSS has become an "extra-constitutional" authority and makes political decisions for the ruling BJP, senior Congress leader Ashok Gehlot today alleged, terming it a "very worrying" development.
The involvement of the RSS in government decisions is well-known, Gehlot told reporters. He said the Sangh, which claims to be a nationalist and cultural organisation, should come out openly into politics, instead of doing shadow-boxing for the BJP.
"The RSS has become an extra-constitutional authority in the country that decides who would be the CM of states, who should be sent to cabinet and who should go to corporations," he said, without offering evidence to support his allegations.
"During the time of late PM Indira Gandhi Ji, these people used to allege the same about Sanjay Gandhi Ji. The whole country knows RSS is working like extra-constitutional authority today, which is very worrying," he said.
This was not the first time a Congress leader has accused the RSS-BJP of compromising constitutional institutions. The Congress leadership has previously attacked them for having a "fascist" ideology and charged the RSS with "interference" in the running of the central government.
In the political resolution adopted at the 84th Congress Plenary session in New Delhi on March 17, the party alleged that the country's core constitutional values were under attack, with institutions under stress and their independence compromised.
The AICC general-secretary in-charge of Gujarat said Congress leaders are capable of countering the RSS-BJP combine - ideologically and politically. He asked the BJP to fight the Congress on policies and principles.
« Back to LIVE