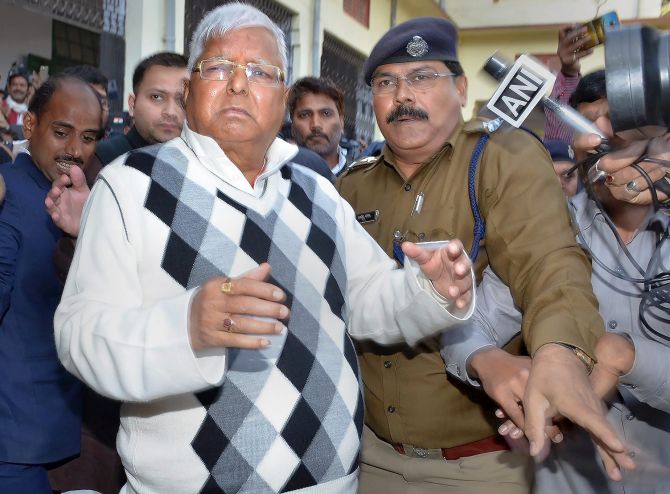 Jailed former Bihar chief minister Lalu Yadav has been sentenced to seven years in prison in the fourth fodder scam case.
On Monday, the former Bihar CM was found guilty along with 18 others.
This is the fourth conviction for Prasad in fodder scam cases pertaining to illegal withdrawal of money from government treasury in 1990s in the undivided Bihar when RJD was in power and Prasad the chief minister.
Prasad has been in Birsa Munda jail at Ranchi since December 23 last year after being convicted in the second case pertaining to illegal withdrawal of money from Deogarh treasury.
Earlier, the RJD supremo was convicted on September 30, 2013 in the RC 20A/96 case of Chaibasa pertaining to illegal withdrawal of Rs 37.7 crore in the 1990s. He got five years prison term in the case following which he was disqualified from the Lok Sabha and barred from contesting elections for six years after completion of jail term.
In another Chaibasa case, RC 68A/96 pertaining to Rs 37.62 crore, he got five years prison term on January 24 this year.
« Back to LIVE