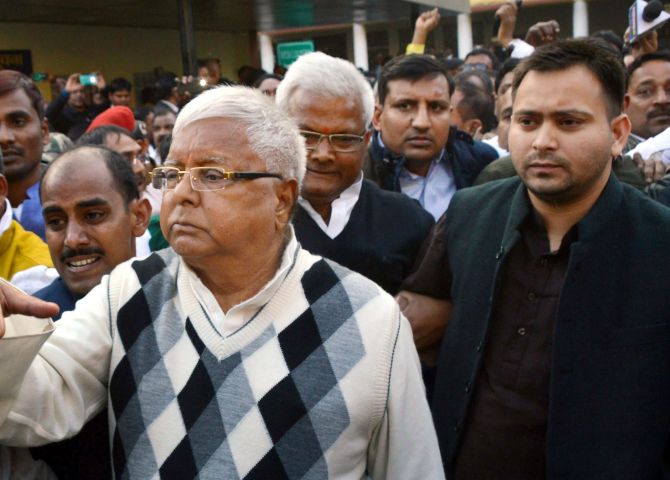 Rashtriya Janata Dal chief Lalu Yadav has been sentenced to seven years in jail under two offences in the fourth case linked to the fodder scam. The former Bihar chief minister, who was convicted by a court in Jharkhand's Ranchi on Monday, has also been fined Rs. 60 lakh.
"I fear for his life," son Tejashwi Yadav told reporters, claiming there appeared to be a conspiracy against his father.
It was not immediately clear whether the two sentences would run concurrently or consecutively. Lalu Prasad's lawyer said the court did not specify if the sentences would run consecutively. "I will need to see the ruling," he said.
The fodder scam involves the embezzlement of government funds in Bihar meant for cattle fodder. The multi-million-rupee scam surfaced in the 1990s when Lalu Yadav was chief minister of undivided Bihar.
This fourth fodder scam case relates to Rs. 3.13 crore swindled from the Dumka treasury between December 1995 and January 1996.
« Back to LIVE