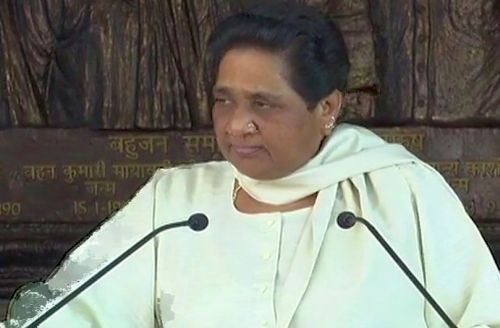 Mayawati addressed the press after her Bahujan Samajwadi Party was defeated in a keenly-fought battle for a Rajya Sabha seat in Uttar Pradesh.
She had hinted that the setback in Friday's election was unlikely to impact her party's new partnership with Akhilesh Yadav's Samajwadi party. She had also attacked the Yogi Adityanath government for using money and fear to get lawmakers to switch sides.
>> BJP is not at all stopping from its bad habits, like its past characteristics
>> Yogi Adityanath's loss in Gorakhpur and Keshav Prasad Maurya's loss was a big blow after which BJP tried its best to defeat us and misused its powers
>> Even in yesterday's 10 seats, people including the media have observed that the Modi and Adityanath governments have misused power
>> Everyone knows BJP's misuse of power and that they established an atmosphere of terror and also had cross voting. Many lawmakers had to cross vote to save themselves
>> This immoral victory cannot make up for their defeat in Gorakhpur and Phulpur
« Back to LIVE