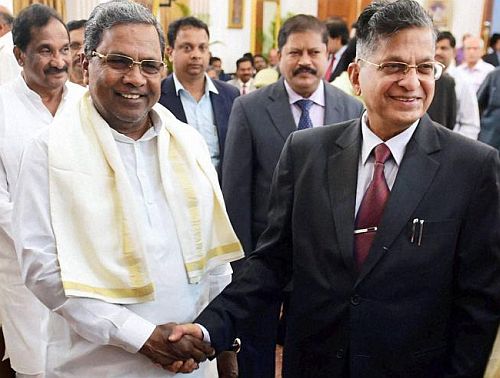 Karnataka Home Minister Ramalinga Reddy on Thursday said a top police official had been suspended for lapse in security after Lokayukta P Vishwanatha Shetty was stabbed by a man in his office.
"The state cabinet has decided to suspend DCP Yogesh for lapse of security in the Lokayukta stabbing case," he told reporters in a WhatsApp message.
Shetty was on Wednesday stabbed multiple times by a man who went to his office with a complaint only to be told that the case had been shut.
The lokayukta had collapsed after Tejaraj Sharma attacked him with a knife in an "attempt" to kill him in his chamber in a multi-storeyed building near the Vidhana Soudha.
The incident also had prompted Home Minister Rajnath Singh to speak to Karnataka Chief Minister Siddaramaiah and he had expressed concern over the attack.
Shetty, in his early 70s, took over as the state Lokayukta in January 2017 succeeding Y Bhaskar Rao, a former high court chief justice.
« Back to LIVE