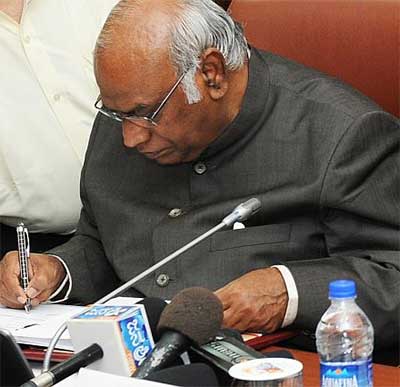 Congress leader in the Lok Sabha, Mallikarjun Kharge, has refused to attend the meeting of the selection committee for Lokpal appointment.


Declining Prime Minister Narendra Modis invite to a meeting called to pick the lokpal, Kharge wrote saying that the "Special Invitee Invitation is a concerted effort to exclude the independent voice of the opposition from the selection process of the most important anti-corruption watchdog.


The Lokpal selection committee on Thursday is to meet to pick an eminent jurist. In attendance will be  Chief Justice of India Dipak Misra and Lok Sabha Speaker Sumitra Mahajan.


The Congress leadership is unclear on what Kharges role would be in the meeting as a special invitee and Whether he will have the right to oppose, if the government pushes an unpalatable name


Kharge has said that the Modi government had made changes in various statutes such as the Delhi special police establishment (amendment) bill, 2014 to substitute the leader of opposition with the leader of the single largest party in the selection committee.
« Back to LIVE